The battle of the corporates 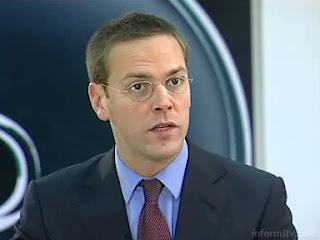 A glorious little spat is developing between James Murdoch and sundry vassals of the BBC empire, faithfully recorded by The Guardian.

This follows a speech by the son and heir to the Murdoch empire on Saturday evening at the Edinburgh festival, when he launched a "scathing attack" on the BBC, describing the corporation's size and ambitions as "chilling" and accusing it of mounting a "land grab" in a beleaguered media market.

"The corporation is incapable of distinguishing between what is good for it, and what is good for the country," claimed Murdoch junior. "Funded by a hypothecated tax, the BBC feels empowered to offer something for everyone, even in areas well served by the market. The scope of its activities and ambitions is chilling."

Murdoch added that the BBC's news operation was "throttling" the market, preventing its competitors from launching or expanding their own services, particularly online.

"Dumping free, state-sponsored news on the market makes it incredibly difficult for journalism to flourish on the internet. Yet it is essential for the future of independent journalism that a fair price can be charged for news to people who value it," he said, then adding: "We seem to have decided to let independence and plurality wither. To let the BBC throttle the news market, and get bigger to compensate."

Needless to say, the great monolith was not impressed. BBC Trust chairman, Sir Michael Lyons, immediately countered with a broadside of soothing platitudes, declaring that: "British broadcasting is admired around the world". Speaking from a well-honed corporate crib-sheet, long ago committed to memory, he then extruded yardage of verbal material of a width (if not quality) that only a time-served BBC executive could produce.

"Its diversity of broadcasters and their variety of funding methods is a strength and not a weakness," he trilled. "The public tell us that they ... trust the BBC and value the wide range of services we provide. The BBC Trust ... is here to strengthen the BBC for the benefit of licence fee payers, not to emasculate it on behalf of commercial interests."

Not having a dog in this fight – regarding the BBC and Murdoch output equally detestable – it is at least entertaining to see the corporates slugging it out over the same bone. With his dad hankering after charging for online content, Junior knows full well that the moment he tries it, users will migrate to the "free" Beeb and other free content providers, leaving his websites sucking thin air.

However, the Murdochs (both dad and junior) have a point. As long as there is a BBC imbibing at the tit of public finance, jailing people for not paying a tax on owning a television, it is going to be very hard to develop a paying model for online journalism. But, if the alternative is a Murdoch-dominated media, some might say that the Beeb is worth having, even if its only role is to spike News Corp's guns.

The public could, of course, be the deciding factor, if it so wished, simply by ignoring the BBC's increasingly dire output – as we tend to do. But then there are so many people who do genuinely believe the BBC is "wonderful" that it ain't going to happen in a hurry. We will just have to be content with seeing the Murdochs stuffed and take what little enjoyment we can out of the battle of the corporates.