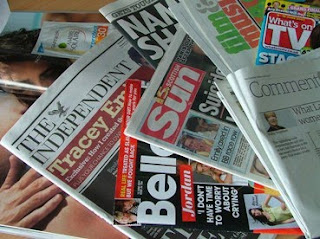 Considering that the news of the 200th fatality arising from our expedition in Afghanistan was released only about 7pm last night, it says something for the technical skills of the print media that the news made most of the front pages of the Sundays today.

However, such was the timing that only hasty re-jigging got the news in, without sufficient leeway for the editorial and comment pieces that would have accompanied such news, had the details been available earlier.

The same also applies to the 201st fatality. Although incurred – in Sangin again – earlier on Saturday, the release was held back until the Sundays had gone to press, thereby robbing them of the news "hook" which would have cleared the front pages and most of the rest of the "book".

Even in the grisly arithmetic of battlefield casualties, therefore, news management plays a central part in the drama, the controlled release thus enabling Gordon Brown to hit the TV studios today (featuring on the Andrew Marr show) in a carefully planned exercise in damage limitation, before the Monday papers get to chew over the issue.

This was always going to be the case. As long as the media is intent on using the completely artificial "milestone" of 200 deaths as a trigger for a torrent of (largely hostile) coverage – the government will attempt to manage the news, to mitigate the adverse effects.

In fact, the KIA stand at about 170, others having been killed in accidents, illness or suicide, directly or indirectly related to the action in Afghanistan. But, as we pointed out in the forum, Service-wide non combat deaths far exceed those experienced in combat, the largest single cause being vehicle accidents. These, however, escape under the media radar. Until recently, they were not even recorded centrally.

The distinction between total fatalities and KIAs, however, leaves it open to the media to come back for a second bite at the cherry, recording the event when the KIAs reach 200. By that time, total casualties will be close to the "magic" figure of 255 – the number lost in the Falklands War. That, in turn, will trigger more press comment.

There is no point in decrying this dynamic. That is how the media works and to expect it to do otherwise is like expecting the archetypal cat to bark. But what today's media response – and the response in days to follow – does illustrate is that media management is as much a part of modern warfare as is engaging with the enemy, and just as important.

What is not as clearly recognised is that media response also has tactical and strategic implications. With the headline treatment of fatalities, commanders have been known to adjust tactics – contrary to theatre requirements – in order to minimise casualties, or even delay operations which might give a casualty spike, in order to avoid politically sensitive events, such as domestic elections.

Both these dynamics were evident in the Iraqi campaign, with the retreat to the bases in Basra (and the evacuation of Camp Abu Naji outside al Amarah) dictated more by the need to keep casualties down than for any sound tactical reasons.

Similarly, the decision to abandon Musa Qala in 2006 was very heavily influenced by the increasing difficulties experienced in re-supplying the platoon house by helicopter, and the fear that it was only a matter of time before a Chinook was lost, the casualties arising having a devastating political effect.

It is highly significant in that context that the 201st fatality reported today is the 100th to die from an IED. Take those (or a substantial number of them) out of the equation and the media storm that is about to break would not be occurring. But, to have been able to deal with the IED would have required a whole new set of equipment and tactics, which neither the politicians nor the military have been able to devise in time.

Thus, in the absence of effective battle management, all the government has left is media management and, as we write, there is evidence that this is not going to be enough. New Labour is at last beginning to discover that even the most skilful "spin" cannot trump reality for ever. The body bags are telling their own story.