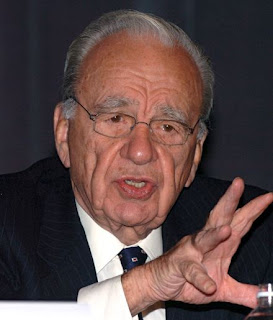 Rupert Murdoch "the billionaire media mogul" is fed up with giving away his product free of charge on the internet and, according to The Guardian and others, plans to charge for all news websites by next summer.

This follows his "global empire" taking an eye-watering £2bn net loss for the financial year to June, hit by huge writedowns in the value of its assets, restructuring charges and a dive in commercial revenue. Thus, Times and Sun readers are going to be expected to pay for content, via a mechanism as yet undisclosed.

The received wisdom, of course, is that users will not pay for news and comment on the internet (or, indeed, many other intellectual products) and, so far the media industry has been relying on the advertising and sponsorship model for its revenue stream. But, with the downturn in advertising revenue, even Midas Murdoch is clutching for pennies.

Murdoch says he has completed a review of the possibility of charging and that he is willing to take the risk of leading the industry towards a pay-per-view model: "I believe that if we're successful, we'll be followed fast by other media," he says.

Maybe he is right – the man did not get mega-rich by picking losers, and if anyone can make it work, he can.

However, the man – like the rest of us – is up against cultural values. Strangely, none of us would expect to go to the supermarket and help ourselves to groceries, without thought of paying, yet the value of intellectual property is so often discounted. The grocers get rich and the philosophers starve.

Murdoch complains that: "Quality journalism is not cheap," and he is dead right – not that the proprietor of such papers as the News of the World can know much about quality journalism. In fact, not even tat comes cheap – you still need someone to produce it.

The game is given away when Murdoch reveals that the charging model will be extended to red-top tabloids such as the Sun and the News of the World. He says he is keen to capitalise on the popularity of celebrity stories: "When we have a celebrity scoop, the number of hits we get now are astronomical," he tells us.

Maybe that is the secret – produce tat, pile it high and sell it cheap. There may be enough punters out there to make it pay. But when it comes to "quality journalism" though, we suspect that that declining commodity will go begging.