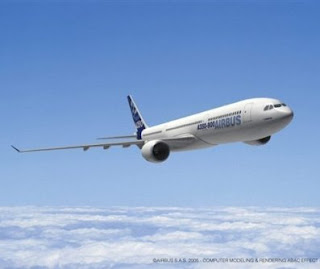 Airbus, that world-leading generator of computer graphics, has succeeded in suckering HMG into dolling out £340 million (€394 million) in soft loans to help build its A-350 long-range, medium capacity airliner.

This, we are told is not quite as much as Airbus had hoped for, having already extracted promises from France for a loan of €1.4 billion and from Germany €1.1 billion, towards the development cost of about €12 billion.

According to The Times, inputs are normally proportional to the amount of work share and since the UK typically gets about 20 percent, including the wing building, between €700 million (£600 million) and €850 million might have been requested.

However, with sales of the A-380 "superjumbo" stalled – with little chance of ever reaching a break-even point - and the A-400M programme running heavily behind schedule as well as massively overspent, by any normal commercial criteria, Airbus would have great difficulty attracting loans on the money markets.

Cash flow in this game, though, is everything and this healthy injection of cash from government coffers will undoubtedly be used to shore up the existing programmes, in the hope that they will then generate enough funding to finance the A-350 development. Even if the A-350 money is ring-fenced, Airbus can be as creative with its accounting as it is with its computer graphics.

What we have therefore – in effect – is a massive Ponzi scheme, where the money for future projects is being used to finance current, loss-making aircraft which have yet to pay their way. This locks Airbus into a continuous cycle of producing more and more projects, the cash for each new one financing the last, the scheme continuing until the supporting governments finally pull the plug (which may be some time never).

Needless to say, the Yanks are a tad miffed. The Office of the US Trade Representative, which negotiates trade agreements on behalf of the US president, has slammed the move, complaining that to launch a new raft of "subsidies" just as the WTO is due to rule on a previous dispute is "a major step in the wrong direction."

Boeing, with its competitor 787 "Dreamliner", which has also had its fair share of troubles, sniffs that "Airbus should finance its aircraft development using its own cash and commercial loans." But as long as Airbus represents a cross between a national symbol for the EU and a job creation scheme for member states, that is never going to happen.

British ministers hope that in addition to supporting jobs at Filton and Broughton the loan will help create and sustain more than 5,000 jobs within the supply chain across the UK and, at the moment, jobs are the sensitive point in the economy.

The real loser though – apart from the British taxpayer – seems to be the RAF and the Armed Forces in general. Instead of dumping the A-400M and buying something sensible like more C-17s or C-130Js, HMG has used its continued support of this failed project as a bargaining chip to maintain its job share on the A-350 while reducing its input.

As they gaze at their computer generated graphics of weapons and supplies delivered to them overland, for the want of the real things, as our strategic airlift awaits the pleasure of Airbus – British troops in Afghanistan (if they are still there in a couple of years) can at least bask in the warm glow that comes from knowing they have supported jobs in Filton and Broughton, and helped sustain more than 5,000 within the supply chain.

Pity about their "supply chain" but then every Ponzi scheme has to have its losers.