Another reason to dump Ryanair 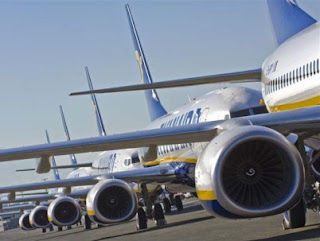 According to Euronews, Europe's biggest budget airline, Ryanair, has "climbed on board the campaign to give the Lisbon Treaty wings."

We are told that the airline's chief executive Michael O'Leary has "dismissed what he called a lot of mumbo-jumbo in it" – whatever that means. But, for him, the "clincher" is concern over Ireland's economy. Presumably, he thinks that ratifying the treaty is going to make Ireland's economic woes evaporate.

More detail, however, comes from the Irish Times which tells us that Ryanair is to spend €500,000 on advertising and cheaper airline seats in its campaign for a Yes vote.

O'Leary says that "Ireland's (i.e., his airline's) future success depends on being at the heart of Europe and our membership of the euro." His company plans to spend €200,000 on newspaper and internet advertising and posters, and €300,000 on "deeply discounted seats", to emphasise that "the EU'’s policy on lower air fares was one of the reasons for Ryanair's existence."

This is the man, of course, who in October 2005 was telling us "We should shoot EU regulators…", an instruction with which we would be happy to comply.

But, when the chips are down, self-interest prevails and O'Leary has thrown in his lot with the "colleagues". But, of course, this has absolutely nothing to do with Ryanair's long-standing bid to take over Aer Lingus. It is thus a complete coincidence that the ailing airline is softening its stance towards a possible deal with Ryanair, having already rejected two bids.

Ryanair, in fact, is barred by EU takeover rules from making another bid for Aer Lingus until January but O'Leary's current enthusiasm for the project will surely do no harm when the EU commission comes to consider whether it approves the bid. Then, as they say, money talks.