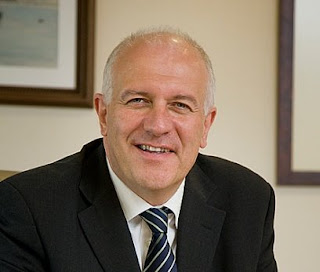 That is the slogan which graces the Conservative website, borrowed from the Obama campaign.

However, that slogan has been fresh impetus by Bill Rammel, armed forces minister of state, who has told a conference at Rusi that Britain's Armed Forces need to be overhauled drastically to counter the terrorist threat to the country.

This comes to us via The Times, with extracts of the speech on the MoD website.

Reading the speech extracts, it is a little difficult to discern the clarity of the line presented to us by the newspaper. The word "change" is not immediately visible in what the MoD chooses to give us and, therefore, we are reliant on the second-hand account for what actually transpired.

From this we learn that Rammel is declaring that the role of the services in fighting international terrorism and other threats will be looked at closely in the defence review – the one that will take place after the next general election. He thus warns that, while the Armed Forces needed to maintain their ability to fight a conventional war, a major shift in emphasis was imminent.

"We have to be prepared to consider deep and wide-ranging changes to our Armed Forces," Rammel is quoted as saying. "We will need to rebalance our investment in technology, equipment and people to meet the challenge of irregular warfare over the next decade while still retaining our ability to respond to emerging state-led threats and other military challenges."

This is no more or less than this blog has been saying since the very start – in part. The structure, equipment and philosophy of an army designed for counter-insurgency needs to be very different from one faced with the conventional, high-intensity between-states war. The one is not a version of the other, played out at a slower pace.

The trouble is that there is an element of running with the hare and the hounds here. Because the two broad types of warfare are so very different, and largely incompatible, to be able to fight both we need, effectively, two different armies.

With the wealth and resources of the United States, that is a possibility, yet even the Americans are having to make choices, and are buckling under the strain of affording the high-end equipment.

For the UK, however, we simply cannot afford both. Arguably, we cannot afford either. But then we do not need to. No one sensible is arguing that any military enterprise in the future will be conducted as an independent operation. We will almost certainly be working within the framework of an alliance or coalition.

Therein, though, lies the unanswered question, and an underlying, unresolved tension. Current and recent adventures have been executed under the US military umbrella. Others – and there are many of them – would prefer that we worked more closely with the Europeans. Again, we cannot do both. The two options are entirely incompatible.

Rammel, therefore, seems to be talking the talk, but not walking the walk. If we are to make a serious contribution to the Afghan adventure, then indeed our Armed Forces will have to undergo fundamental change. But that will be at the cost of our being able to field a high-end force capable of autonomous operation (not that we have one anyway).

Equally, closer integration with the European would degrade our capability to work alongside the Americans, possibly leaving us in a worse position, as the Euros are by no means capable of matching US military might.

Either way though, change there must be. The current fudge is unsustainable. But more deadly would be a new fudge, without resolving the fundamental issues. That is where the debate must lie and, so far, Rammel seems to be talking us into a new fudge.