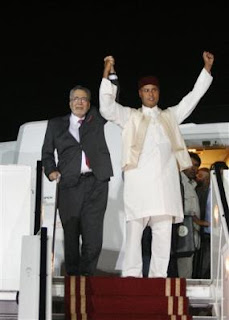 A strong feeling of the need to apologise for the obsession with Afghanistan on this blog is somewhat tempered by the realisation that, this week, we have had near-record hits, albeit that an increasing number are directed at Defence of the Realm.

Fortunately for the government, the Lockerbie affair has dominated the front pages this week, with the repatriation of Abdelbaset Ali Mohamed Megrahi and the faux indignation directed at the Scottish Executive for releasing a "mass murderer" to die (or not) with his family.

Since a huge number of people are convinced of Megrahi's innocence, including many of the relatives of the victims of the bombing, this affair has all the hallmarks of one of those grand political stitch-ups where no one in the corridors of power is particularly keen that the truth – much less the whole truth – should be known. We are but pawns in a bigger game.

Nevertheless the affair has had the merit of squeezing the train-wreck of the Afghan election out of the headlines, limiting analysis of what is turning out to be another of those grand political stitch-ups, as the Western powers manoeuvre themselves into a position where they can extricate themselves from an unwelcome commitment, without making it too obvious that they have been roundly defeated.

The additional merit of the affair is that, at a the tail end of the "silly season", it is keeping the political classes and their claque occupied and diverted. One notes that Cameron is demanding a statement from Brown on the release of Megrahi, but is seemingly uninterested in the fate of the peoples of Afghanistan and their "stolen election" - peoples who, like our troops, are mere cannon fodder in the greater game.

The strands here are beginning to come together, and one really must admire the way the governments of the coalition nations are keeping in the dark their own public – and the Afghan people – while the deals are stitched-up behind closed doors, preparatory to handing over the nation to a re-invented Taleban and declaring yet another grand victory for democracy in the style of Iraq.

It is going to take a few more posts to work this through, so we'll continue with the reporting and analysis, as we gradually put the pieces together.