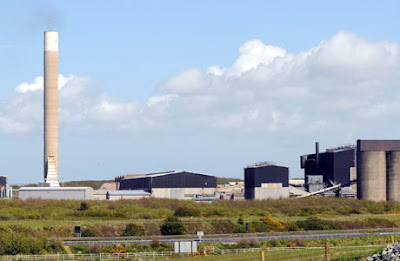 In an expected but nevertheless "shock" move, bosses at Anglesey Aluminium Metal (AAM) have confirmed that smelting activities at the Wylfa plant will cease on 30 September.

The impending demise of this plant – a major employer in Anglesea – we reported in January, the closure precipitated by EU state aid rules which prevented the state owned Nuclear Decommissioning Authority (NDA), which owns the Wylfa power station, selling electricity to the plant at below market price.

Even though that arrangement – a continuation of the previous contract, a type common in the industry for bulk buyers – was profitable for both parties, by virtue of recent state acquisition of the power plant, this was deemed contrary to EU rules and, thus deprived of a cheap source of electricity the aluminium plant was scheduled for closure.

This brought hasty action by the government, conscious of the devastating effect the closure would have on local employment – the plant then employed around 540 people at the site - with the offer of a four-year £48m loan, styled as a "government rescue package" to keep the plant in operation.

However, the joint owners, Rio Tinto Alcan and Kaiser Aluminium, have decided that even the availability of cheap money – which would, of course, have to be repaid – was not sufficient to return the plant to viability and have therefore decided on its closure.

This leaves Welsh secretary Peter Hain to utter the usual platitudes, saying: "I am bitterly disappointed we could not reach an agreement to secure the long-term future of the smelter ..." but neither he nor the the BBC give any hints as to the real reason for the closure.

The BBC, in fact, cites a man who has been working at the plant for five years. This is Peter Owen, who tells the BBC that there had been no explanation of why the £48m rescue package had been turned down. "I can't understand what happened," he says.

With the benefit of the bigger picture, we could tell Mr Owen what had been going on, but you can be sure that the BBC won't. The hidden enemy must never be revealed.