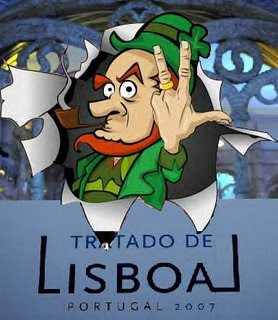 We have received an e-mail from Dr Anthony Coughlan of The National Platform in Ireland, whom we have mentioned once or twice before on this blog. (Well, a few more times than that.) Dr Coughlan thinks the battle for Ireland, a.k.a. the second Irish Referendum, scheduled for October 2, can be won and suggests some ways in which supporters from other countries can help:

So anything that you can do in or from your own country to show soldiarity with the Irish No-side over the five weeks to our referendum and to bring home to voters here that Ireland would not be isolated or "punished" if they dare to vote No to Lisbon again, could be very helpful to us in our democratic struggle.

Such actions could take the form, for example, of delegations to Irish Embassies abroad to hand in letters congratulating Ireland for being the only EU country whose people are being allowed to vote on the "Lisbon Constitution" ... Or demonstrations outside the EU Commission offices in your country, protesting at the Commission's outrageous and unlawful interference in the Irish referendum campaign, something that has been sanctioned by Commission President J M Barroso and his Secretary-General, the Irishwoman Catherine Day.

Any such actions would of course need to be brought to the attention of the Irish media, so far as possible, if voters in Ireland are to be made aware of them. Details of the Irish media can be got on http://www.medialive.ie.

Or people outside Ireland could send letters in English to the Irish national and provincial newspapers making various points about the Lisbon Treaty, showing thereby that people in other EU countries are against the Treaty too. Or they could write privately to friends and acquaintances they may have in Ireland, or to Irish people at addresses taken from our phone book. Or use the internet, blogs and e-mail, especially social networking sites, to send messages to people here.

Or if people had the resources, they might consider putting advertisements in the Irish newspapers. These should not of course entail "telling" Irish people how to vote, or be hectoring or patronising in any way. They should rather make factual points about the Treaty, point out that people elsewhere in Europe are being denied a chance to vote on it, that Ireland would not be isolated if it votes No again, and appealing to Irish voters to "bear us in mind" when they vote on 2 October.

And friends outside Ireland will be able to think of other ways to show their concern and solidarity.

We get many, largely justified, complaints that there is nothing any of us can do. Well, here are many ideas of things people can do to further the cause. Go, go, go!