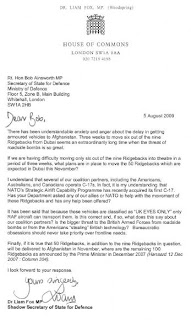 The Ridgeback story seems to be descending into high farce. On the one hand, we have the Evening Standard telling us that the MoD is rushing the three remaining vehicles (six went last night) to Afghanistan after the "transport bungle".

On the other, we have the Press Association retailing a new, "washes whiter" statement from the MoD saying that the "military trucks waiting to be shipped to Afghanistan" were never intended to be used by British troops until the autumn.

In keeping with their reputation for honesty and truth, an MoD spokeswoman denied that this statement represented a "U-turn" and said it was a more accurate reflection of the situation based on "updated information".

Meanwhile, the story has been picked up by Iain Dale, who charts a further intervention by Liam Fox. He has sent a letter to defence secretary Bob Ainsworth (pictured), asking for clarification of the delivery schedule for these vehicles.

Just a tiny little niggle remains though. If the vehicles are not intended for service until the autumn, why is the MoD now rushing them to theatre? This surely cannot be because their presence has been spotted and reported in the media? Could it be that they are not Ridgebacks?

That could explain why they have been classified as "secret" – nothing to do with the coating, as The Times asserts. And it would also explain why they are being spirited away so quickly - before someone makes a positive ID.

As for the "incompetent" MoD ... this would put it in a different league.