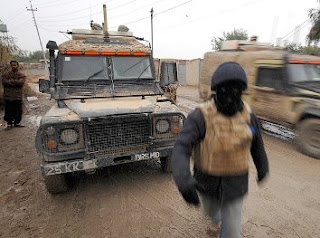 Picked up by The Sun and The Daily Mail is the story of John Salisbury-Baker, the MoD press officer who is suing the ministry for being forced to tell the public "lies" about the war in Iraq.

He is claiming that the trauma of having to "defend the morally indefensible" – such as "telling the media that army vehicles such as Snatch Land Rovers were equipped to withstand roadside bombs" has given him post-traumatic stress disorder.

What comes over from the detail is the way press officers were used to "hold the line" and to keep embarrassing comments away from the media.

Salisbury-Baker was employed at York's Imphal Barracks and it was his job was to visit bereaved families immediately after they had been told that "their loved ones were dead."

Ostensibly there to provide the families with "a shield" to help them deal with media interest after the deaths had been made public, his real job was to act as a minder, to "steer them away from sharper questions from reporters about equipment."

His partner Christine Brooke has made a statement on his behalf, saying that said: "John is an honest, sensitive and moral person and having to peddle Government lies that soldiers in vehicles such as the Snatch Land Rovers were safe from roadside bombs has made him stressed."

She adds that, "He was particularly plagued by the thought that some of the bereaved families he was visiting might have previously believed their loved ones were safe because of what he himself had said to the media ... He felt responsible. He felt he was having to defend the morally indefensible. The vehicles clearly did not give adequate protection from bombs."

Speaking earlier with Sue Smith, mother of Pte Philip Hewett, who was killed in a Snatch in al Amarah in 2005, she told me this only confirmed what they (her family) knew at the time – that the MoD had been consistently lying to them about the safety of the Snatch. Her own Army visiting officer, she learned, had been given instructions to "shut that woman up".

Many people with dealings with the MoD media officials often wondered how their press officers could sleep at night. Now, it appears, one of them could not. Salisbury-Baker has been diagnosed as suffering from post-traumatic stress disorder and is pursuing a claim for disability discrimination on the grounds that the stress of what he was being asked to do effectively made him disabled.

Needless to say, an MoD spokesman said it would be "inappropriate" to comment at this stage. That must be the nearest thing to the truth the MoD has been for a long while.