From the authors of the inquisition ... 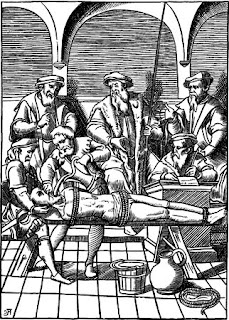 ... comes the plaintive cry that the proposed EU directive on Equal Treatment would force Christians to act against their consciences.

The directive is aimed at harmonising and enforcing a ban across the EU on discrimination on grounds of sexual orientation, age, religious belief and disability, currently outside the scope of employment law. So outraged are the clerics that they have branded the law an "instrument of oppression".

This strident cry comes from the Roman Catholic Bishops' Conference of England and Wales, which, according to our favourite newspaper, has the bishops of England, Wales and Scotland branding as "wholly unacceptable" because it will have the result of sharply curtailing the rights of religious liberty and freedom of expression.

They say they will be powerless to stop witches from hiring out church property, for instance, or from insisting that people at Church events behave in a way consistent with Christian teaching.

Monsignor Andrew Summersgill, the general secretary of the Conference, says that the Church "recognises that groups which do not agree with its teaching should be free to organise themselves and to propagate their views as they wish".

He adds: "What the Church is seeking from this directive is simply the right to maintain its own teaching and activities with integrity, according to its own ethos," he said in a written submission to a public consultation.

Amongst the litany of woes is the prospect of a Catholic conference being legally obliged to make double rooms available to homosexual and unmarried couples as well as for married heterosexuals.

Summersgill asserts that, "At this point the EU would effectively be dictating to religious bodies what their faith does or does not require - a wholly unacceptable position."

Even more bizarre is the definition of harassment in the directive. This says the Monsignor will also mean that any person who decided they were "offended" by an expression of Christianity could bring a case against the Churches. Various pressure groups, he says, are likely to use the provisions of the directive to curtail the expression of views they disagree with by the simple expedient of declaring themselves to be offended.

"Homosexual groups campaigning for same-sex marriage may declare themselves to be offended by the presentation of the Catholic Church's moral teaching on marriage," he said, and "an atheist may be offended by religious pictures in an art gallery, or a Muslim may be offended by any picture representing the human form".

However, the pleas from the clerics seem to be getting short shrift from the "colleagues". The heathen (protestant, actually) Swedes, currently holders of the rotating EU presidency, have indicated they will seek to push the directive through Council in November.

From this blog, readers might detect a similar lack of sympathy. The Roman Catholic church has long been a fellow-traveller of the "project" and it would do no harm for it to be messed up by the EU in the same way that everybody else has been.

Perhaps, with a bit of luck, it will also seriously upset many of the Catholic countries – one can see Poland enjoying this directive - in which case we might look forward to the president of the commission being excommunicated and membership of the EU being declared a mortal sin.

We could also find the warmists declare "climate change" a religion, in which case "deniers" could fall foul of the directive. That would add a delicious new dimension as we find common cause with the Romans. One lives in hope.