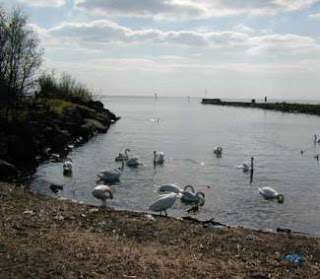 Much to our disappointment, even when we completely ignore the EU for a while, in the hope that it is one of those bad dreams that will go away of its own accord – it doesn't.

Sniffing around the subject (to coin a phrase), we happened on this, where the good citizens of Lisburn are up in arms over a plan to build a giant incinerator on the shores of Lough Neagh, a well-known beauty spot in the area (pictured).

Such is the concern that the Council is backing a public inquiry over an installation, we learn, which is to be provided to burn the estimated 200,000 tons of poultry litter produced annually in Northern Ireland.

The plot thickens when we discover that the applicants, Rose Energy, are proposing the incinerator in response to "new European legislation" which means poultry waste can no longer be used as fertiliser on land and must be disposed of in another way.

Needless to say, people living near the site are concerned about the release of fumes and effluent. But the company insists that this is the only viable option to deal with the EU directive and "are assuring the public that the plant and its operations will be the best and cleanest available."

The interesting thing here is that we are not actually dealing with new legislation. This is our old friend the Nitrate Directive, which readers will instantly recall was promulgated in 1991 as Directive 91/676/EEC.

Here we are, eighteen years later and the law is still working through the system, having its dire effect, and no one even realises its genesis. There is our problem. Everything in the EU tends to work at a glacially slow pace, so slow that even the effects of a law as lunatic as the Nitrates Directive are diluted, as the enforcement takes so long and the attendant costs take so long to accrue.

This very much confounds people like myself and Booker who, when we see the EU legislation come onto the statute books, write of impending disaster and the enormous burden of costs. But when the disaster does not appear to materialise, and we get bored with writing about a catastrophe that never seems to happen, the whole issue disappears from public gaze.

Then, up it pops – an obscure local issue publicised in the local media, with no one joining the dots. The slow-motion disaster is happening.

This is how the EU wins. Watching paint dry is action-packed excitement compared with charting the unfolding disaster of EU legislative action. But just because we're not watching it (and reporting on it), every minute of the waking day, does not mean it isn't happening. It is. It hasn't gone away.