It's a good day for us 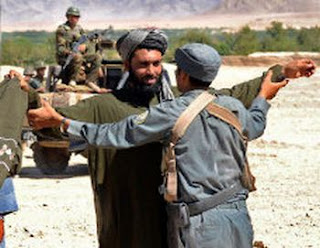 An honest reporter Michael Yon certainly is. I do not know how well the elections turned out in other parts of Afghanistan, he writes, but here in North Helmand Provence, near Sangin, I am told that less than 300 people voted.

In this area the day was marked by serious fighting, he tells us. Apache attack helicopters were firing their cannons throughout the day. The howitzers fired many times. The mortars were firing. Various bases were attacked. On the mission I accompanied the snipers were firing. We got into a firefight, and the soldier beside me had his antenna shot off.

Much the same story comes from Anthony Loyd, stationed in Sangin itself. Streaked with sweat, caked in dust and stinking of cordite, he writes, British soldiers in Sangin spent Afghanistan's election day defending their main base in the town from almost ceaseless Taleban assaults.

By the time polls closed and the final echoes of air strikes, artillery and gunfire died away, he tells us, barely 500 Afghans had managed to vote in a district of 70,000 people, a number signifying victory for the Taleban's power of fear and intimidation.

"It’s a bad day," Sangin's governor told Loyd. This was Haji Faisal Haq, glowering in anger as the polls closed to the rattle of machinegun fire. "My people were not able to come out and vote. I would never wish a day like this upon them again." "I can't say how they feel about it," he adds, as the deep-throated rip of A-10 cannon fire cut the sky above him. "I don't even know how I feel about it yet."

Nevertheless, Yon refuses to characterise this as a failure of the elections. It was a local setback. We saw the same in Iraq in early 2005, where some people boycotted the elections. The situation here is not good, but this is only one area of Afghanistan. I do not know what happened elsewhere, he concludes.

No such doubts trouble the BBC's Caroline Wyatt, based in Lashkar Gah. Although part of a convoy transporting Helmand governor Gulal Mangal, which suffered an IED and rocket attack, she happily reports: "Violence fails to deter Afghans", adding to the earlier, ludicrous report proclaiming: "Afghan poll hailed a success".

These bizarre reports from the BBC, topping up its refusal to publish any details of the shot-down Chinook – a story to which The Daily Telegraph adds – puts the state broadcaster out on its own in the British media. 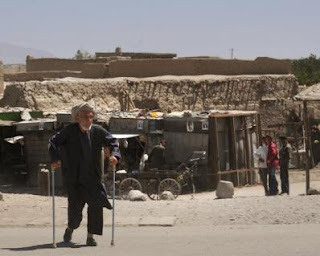 The Guardian tells us that the Taleban's campaign of violence to disrupt the elections "appeared to have succeeded in discouraging voter turnout in the militant south." Throughout the day, the paper says, Taleban fighters launched sporadic rocket, suicide and bomb attacks that closed scores of election sites. Other polling stations saw only a trickle of voters.

As election officers began the formidable task of counting votes, Afghan government officials said the Taleban had "launched 73 attacks in 15 provinces during the voting, killing at least 26 Afghan civilians and members of the security forces." Only then are we told that, "Despite the violence, president Hamid Karzai – who is hoping for re-election – declared the poll a success."

It seems that Kandahar, the country's second largest city and the Taleban's spiritual home, was one of the worst affected locations: turnout there was estimated to be down 40 percent on the numbers seen voting in 2004's election. Constant rocket attacks had largely discouraged voters. Across the country election officials suggested turnout could be 40-50 percent of the country's 15 million registered voters.

Ben Farmer, based in Kabul, writes for The Daily Telegraph, citing a "western diplomat" who estimated turnout in some parts of the south as low as 10 percent though "average to good" in the north.

A colonel in the Afghan army said voting in the southern border province of Paktika had been confined to town centres. In Helmand, an observer said voting was well below levels seen in the previous presidential election. Zabul, another Pashtun province, was described as "eerily quiet" by one monitor.

Another eye witness, Norine MacDonald, was live blogging for the Afpak Foreign Policy website. She had spent a day touring polling stations. In each she had asked the officials whether the turnout had been at the level they were expecting. All said no, they were overstaffed. Disastrously, the number of women voting was only 25 to 35 percent of the male count, and – confirming the accounts of other witnesses - she conveyed the view from her staff, that in the south that voter turnout had been low and female turnout very low.

Of course, we weren't "there", so we cannot possibly vouch for the truth of what has been going on. But it is also true to say that no one was "there" in the sense that they were able to be physically present in every city, town and village. We are all relying, to a greater or lesser extent, on second-hand reports in order to assess the big picture.

From these emerge a picture totally odds with that presented by the BBC, its view shared only by an increasingly delusional officialdom, stretching from Kabul to London and Washington.

And it is far from over. Andrew Wilder, an Afghanistan expert at the Tufts International Center in Medford, Mass, cautions that it's too early to judge if the elections were a relative success or failure.

Wilder sees the security questions as secondary to the fraud finger-pointing likely to come. "Election day is not really when we should expect the most problems," he says. 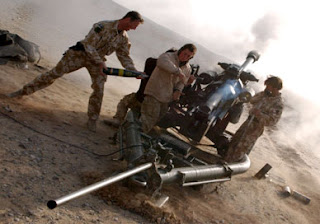 He points out that most of the fraud that marred the 2005 presidential election occurred after the polls had closed. "In 2005, parliamentary election day went really smoothly but the real delegitimisation of the election happened during the counting process," he reminds us.

Yet still, on this flawed process, the Western states of the coalition are basing their optimism about the future of Afghanistan. That view can be about as reliable as the BBC reports, which have sunk to a new nadir of corrupt, biased inadequacy. Caroline Wyatt and her fellow BBC hacks may delude themselves that they are reporting "fairly and accurately" but they, like our government, are only deluding themselves.

The last word, however, must go to an artilleryman in besieged Sangin, interviewed by Anthony Loyd. "It's a good day for us," he remarks happily. "It's what we became soldiers for - to shoot at people shooting at us. Beats getting blown up anyway."