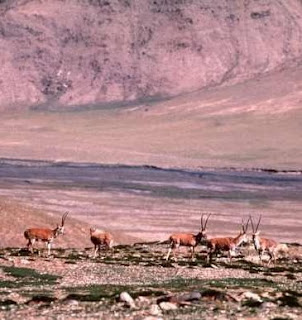 Forget about global warming, swine 'flu and the rest. An outbreak of pneumonic plague has been reported in China.

So far it is only one man, in Ziketan, in the Tibetan area of Qinghai province (pictured), a remote region of north-west China. Eleven others have been infected and the Chinese health authorities are taking it seriously enough to quarantine the 10,000 inhabitants of Ziketan.

And well they might. This is the one – along with Lassa Fever, Green Monkey Disease and other such "exotics" – that has public health professionals really scared.

Passed by direct transmission – person-to-person – mortality rate is between 90-100 percent for untreated victims. Early diagnosis is essential as antibiotics must be given within 24 hours of first symptoms to be effective.

But the stuff of nightmares is that, with an incubation period of one to three days - during which the victim is infective – one person could climb on board a packed Jumbo at some exotic location. Shortly after the jet reached Heathrow, you could have 700 or more infected but asymptomatic persons wandering through London.

Before the epidemic had been identified for what it was (not many GPs would recognise pneumonic plague if presented to them), the incidence could be in the hundreds of thousands, and completely out of control.

It is a nightmare scenario, but it has never happened. There are reasons for that – not least because it the disease is confined to very remote areas. Fortunately for us – the victims usually die before they travel any distances.

The man in Ziketan was a local shepherd, an occupation not normally known for its globe-trotting propensities. But it need not always be so. Theoretically at least, we are always on the edge of a wildfire epidemic. The one consolation, should it happen, is that very few people would then be shouting about the perils of runaway global warming.

What is particularly interesting though, it that with such very real – if remote – threats which could strike us at any time, some sections of mankind feel it necessary to invent spurious threats such as global warming. Perhaps there is something in our psyche which prefers the imaginary Armageddon to the real thing.