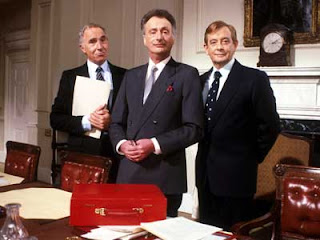 A piece in The Guardian today (yes, another one) has our Mandarins launching an attack on Labour, criticising the party's record on cabinet government.

Doubtless, there is an element of special pleading here as the Sir Humphries are complaining that Labour has abandoned cabinet government during its time in power and routinely bypassed the civil service to exert greater political control over Whitehall.

So concerned are these "Rolls Royce" minds that four former cabinet secretaries – who served three prime ministers over 26 years – have warned that the presidential style of both leaders is a threat to Britain's constitutional settlement.

In particular, they complain that Britain's "great institution" of joint cabinet government is threatened by the growing power of the prime minister. Both Gordon Brown and Tony Blair, they say, have shown little understanding of cabinet government; they operate as a "small unit" and hold "cards rather close to their chest". And, last but not least, Whitehall has been politicised with Blair and Brown presiding over a "massive increase" in special advisers.

Read alongside the interview with Lord Salisbury, which we summarised in late July, this paints an interesting if disturbing picture of the breakdown of our fundamental structures of government.

Salisbury, you will recall, was worried about the "parliamentary muscle" having atrophied, leaving us with "a vast, complicated, self-referential bureaucracy." He warned that, when Cameron tried to implement his own agenda, "He will go into Whitehall and pull the levers and find that nothing works." "I don't think he realises how Whitehall has become so broken," said the noble Lord.

When the civil servants are also complaining, there is clearly something amiss – especially as, with the growing power of the European Union, it is the bureaucrats who have gained most, at the expense of both ministers and parliament.

Probably, what is happening is that, in the areas dominated by EU policy – such as agriculture and environment – the civil servants are left to run their affairs alongside our masters in Brussels, with very little interference from ministers or MPs. On that, the Mandarins are silent.

Of those policy areas where there is less interference from Brussels, however, ministers seem to be taking a far greater managerial role, cutting out the traditional structures, hierarchies and lines of demarcation, leaving many of their senior civil servants in the dark as to what is going on.

On the other hand, though, in by-passing the Mandarins, ministers are clearly finding it more and more difficult to enforce their wishes and diktats, as the two sides are no longer talking to each other freely, or working together. And while even senior civil servants cannot make and enforce their own policies, they have an endless capability to sabotage anything a government might wish to implement, should they be so minded.

This may be one of the dynamics affecting defence, about which we have so recently written, where ministers (and the prime minister) are no longer in the thrall of their civil servants but are increasingly finding it difficult to impose their collective wills. The levers of power have indeed become disconnected.

If the dysfunctional performance of the current administration is not unrelated to these developments, then this further reinforces the view that there are serious repairs to the system required, before government can begin to function effectively again – if indeed that is possible, given how much power has drained elsewhere.

The retired mandarins, however, want to see a return to the tradition in which the cabinet office and the cabinet secretary acted as "guardians of collective responsibility of government" with the prime minister not a presidential figure but first among equals. This may be the civil services' ticket to restoring some of its own power over government, but since so much of that power is simply now exerted on behalf of Brussels, this will not necessarily improve matters.

Short of that, though, we are left with a situation where, increasingly, no one is really in control and the machinery of government will continue to deteriorate. That which has been so easily broken cannot be so readily mended.