The last throw of the dice? 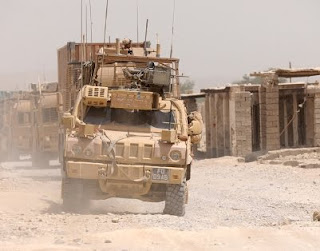 In March 2007, soldier turned journalist Anthony Loyd thought the war in Afghanistan was "winnable". The tide was turning against the Taleban, he wrote.

That was from a man who was "there" and we all accord great respect to those knowing figures who have "been there", as able to divine from their very presence all there is to know about the region they happen to visit.

There was little to show yesterday, he writes, for the copious expenditure of British money, bullets and blood over the past three years in Sangin. With less than 24 hours to go before the start of voting in Afghanistan's presidential election today the streets were all but empty and the bazaar was, in effect, closed.

Driving through the middle of town with a combined patrol from 3 Company, Welsh Guards, and the Afghan National Army, he saw only two small children and a man on a motorbike. The centre of Sangin resembled an abandoned film set, with even the nearby ferry, usually a lifeline for locals wishing to cross the Helmand river, beached on the shore, the banks abandoned.

The Taleban, who have launched a concerted campaign of intimidation to close Sangin to anyone wishing to vote, fired a handful of mortar rounds into the town soon after midday as a reminder of their presence. The lazy, jackhammer thumping of an Apache helicopter’s 30mm cannon drifted over the day's singing heat in response. For British troops in Sangin's Forward Operating Base Jackson, the day's events ended with an incoming 107mm rocket and the returning clatter of heavy machinegun fire.

The piece is worth reading in its entirety, so we won't repeat it here. But it should be noted that Loyd acknowledges there has been progress. Soldiers no longer have to fight their way out of the gates, he writes. But they die in greater numbers as a result of bombs placed at the edge of Sangin, he adds.

And, one might add, their supply helicopter got shot down so, in addition to the hurried visits by Chinooks, they have also been supplied by a heavily armed convoy. The picture shows the photographic debut of the Panther in Afghanistan, this one driving through Sangin at the head of a section of that convoy.

From the limited view of the backdrop, this does not immediately strike one as a bustling, peaceful metropolis. It rather fits Loyd's description of the town, even if the photograph was taken some days earlier.

Nor, indeed, are the problems confined to Sangin. At the centre of British power, in Lashkar Gah, according to The Independent, the Taleban are blockading the city, threatening potential voters and mining the roads.

Says the paper, the Helmand provincial governor, Gulal Mangal, hoped 75 percent of the province's 800,000 people would vote. But privately, his staff were more realistic. "We'll be lucky if we get 200,000," said a senior official.

In Kajaki, where British troops are helping on a project which will provide electricity, the Taliban has set up a radio station which broadcasts repeated warnings against voting. In Zabul insurgent commanders have commandeered mosques to threaten dire consequences for the election process.

The coalition and the British government have invested a great deal of political and financial capital in these elections, and the process of preparation has cost us a great deal of blood. It is a big gamble, writes Robert Fox in The Guardian.

Of course, we are not "there", so how can we know anything? But we would be willing to gamble that this could be the last throw of the dice. The interesting thing is that, if such a decision is made, it will be made in London, not Kabul or Sangin. And we were "there" once. I can even tell you that the fire extinguishers in No 10 Downing Street did not conform with EU regulations.