Blessed be the peacemaker Re-reading Michael Yon's latest despatch for the umpteenth time, my own thinking hardens into a single question: why are we messing about?

The heaviest piece of kit used in the entire operation to clear Pharmacy Road is an armoured JCB (pictured left) – with all the substance and presence of a Tonka toy. It is not even an HMEE.

What we should have been using were these (pictured below) – the Mantak D-9 Armoured Bulldozer. There is even a remote-control version. 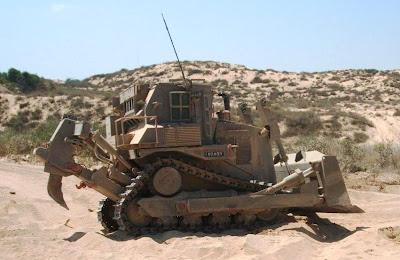 There are more pics here (about eight-tenths the way down). One of the captions reads:

Talk About Intimidating. You do NOT want to be anywhere around this monster when it is barrelling towards you with several tons of mines scooped up from your locally laid minefield, otherwise you might be eating a lot of dirt and body parts for dinner.

Michael Yon writes about these baked mud walls stopping 30mm cannon rounds and being left standing when 500lb bombs drop in compounds. They would not last two minutes in front of a D-9.

Then, you open up a compensation office and pay a fair price for the damage. The cost would still be cheaper than a brace of GBUs and the delivery charges – much less the compensation you have to pay to the relatives of dead soldiers and limbless servicemen.

But what about "hearts and minds?" I hear you cry. Well, there is nothing benign in permitting the Taleban to kill Afghan citizens. Yon writes that two civilians were killed by IEDs after the road clearance operation.

One was killed when he tried to strip one of the blown-up vehicles left by the British engineers. The other died on a route he had thought cleared by the British. It had not been. "The Taleban blows up a lot of local people in Sangin," Yon observes. Where is the "hearts and minds" in allowing that to happen?

The Afghanis, we are told, want security more than anything. That is how you give it to them. Sending out our own young men to die in narrow alleys, surrounded by high walls, prey to the IED and the bullet, is not. It achieves nothing.

Blessed be the peacemaker – it is called an armoured D-9.