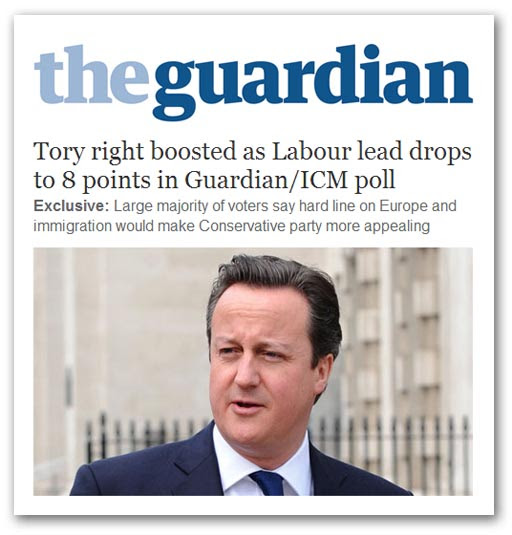 Polls may come and polls may go, but in the frenetic Westminster Village atmosphere of plot and counter-plot, this current Guardian/ICM poll is of some interest.

A month after Eastleigh, it has the Conservatives clawing back some of Labour's lead, to stand at 31 percent, while Ed Miliband's party stands at 39 percent. The Lib-Dems are up two, on 15 percent, and the UKIP "fever" has abated somewhat, with that party dropping from nine to seven percent.

But what is more significant is that there is apparent support across the political spectrum on issues such as the EU. By a majority of 67 to 25 percent, voters across the spectrum say "the Conservatives would be more appealing if they took a tougher line with Europe".

Thus, the poll indicates that the "right" is solid in believing a tougher line would boost the Tories. We get 83 percent of Tories, and 100 percent of UKIP supporters favouring this line, but even among Labour and the Lib Dems majorities of 56 and 64 percent respectively take the same view.

An even larger majority say the same about "a tougher line on immigration". Overall, a tougher policy is favoured by 75 to 21 percent. And in what the right may seize on as a rejection of gay marriage, voters judge by 69 to 24 percent that the Tories' appeal could be boosted by keeping "themselves on the side of traditional families".

Interestingly, though, there is little support for views of former defence secretary Liam Fox, who on Monday called for lower taxation as a priority, with a freeze on public spending. That attracts only 21 percent of the poll – respondents who hope for "lower taxes" above all else.

As regards the bigger picture, Fox in any event is seen as a busted flush and would be unlikely to attract any significant support in the Tory leadership stakes. Teresa May, having gone out early, with Hammond as a possible running mate, is attracting a degree of opprobrium for her lack of "loyalty".

She, like others (although she should know better) has been gulled by the media chatter about leadership contests – the standard fare of the media claque, whose political correspondents have long since ceased to report serious politics and are entirely focused on personalities and gossip.

However, going too early likely means she will crash and burn – the early front-runners rarely win the race. And, if this poll is any indicator, the "Europe" card may be as significant as we hoped it would be.
COMMENT THREAD
Posted by Richard at 22:42