Media: more "accuracy" from the Mail 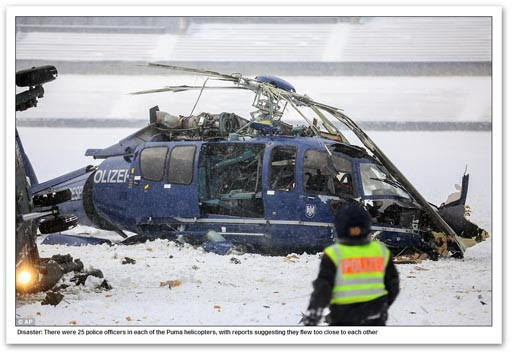 A tragic accident during a police exercise in Berlin had two Super Pumas landing in sequence near the Olympic Stadium on the Maifeld, the first of the pair – according to Berliner Zeitung - being hit by what looks to be a Eurocopter EC155B, as it came into land.

Witnesses report that the first Super Puma helicopter landed smoothly on the snowy Maifeld. Shortly thereafter, the second Puma landed at a distance of about 30 meters. The pilot had waited until the whirling snow had settled. The third pilot, flying the Eurocopter, had apparently not as much patience. His aircraft crashed into the still-rotating blades of the first Puma.

This, however, is translated by the Daily Mail into a crash between two Puma helicopters - each with 25 police officers in them - even though the photographic record clearly shows one of the stricken machines to be a very much smaller Eurocopter.

This brings us back again to Leveson telling us that mainstream journalists have "a powerful reputation for accuracy" while bloggers and tweeters were "no more than electronic versions of pub gossip".

Once again, though, the Mail offering is another powerful reminder that you simply cannot take anything the legacy media tells you at face value. At the very least, you need to triangulate, referring to independent sources, before an account can be accepted.

Then, one has to observe, if a newspaper cannot even get a simple account of an accident right, what reliance can be placed on accounts of more complex events, where technical issues are involved, and a degree of understanding is required?

Sadly, the answer is all too obvious. Nothing, but nothing should be entirely trusted, not blogs (including this one), not tweets and most certainly not the legacy media.
COMMENT THREAD
Posted by Richard at 20:34