EU politics: no help from the Italians 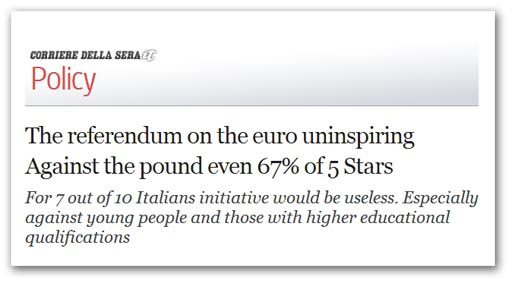 While the Google machine translation is quite good with German, it is less so with Italian, the headline for the Corriere Della Sera reading, "Il referendum sull'euro non entusiasma", which it turns into: "The referendum on the euro uninspiring".

It might perhaps be better put as "no enthusiasm" for a euro referendum, which is the thrust of the piece, telling us that Beppe Grillo's proposal is falling on stony ground. The majority (69 percent) of Italians surveyed in an opinion poll for the paper were against the idea of a referendum, with 36 percent strongly against, as against only 30 percent in favour.

Worst still for Grillo, even 67 percent of his own supporters did not want a referendum. And, on the substantive question, 73 percent did not want to return to the lira, very close to the 74 percent of overall response, with just 16 percent wanting to dump the euro.

Even amongst those who would be prepared to leave the euro, many still regard it as a "negative event", giving a majority (82 percent, including 53 percent who considers it "a disaster) who think it would be a bad thing. Furthermore, opinion is hardening. In June last it was 70 percent, with 74 percent recorded in September.

Significantly, 77 percent of Grillo's supporters who were in favour of an exit regarded it as a negative event for the economy.

A Reuters report adds a little political background (although it does seem to muddle the figures), but the upshot is that the vast majority of the population seem to support the euro. Corriere Della Serathinks that is means that the traditional parties have a chance of recovering support from Grillo, although it concedes that how well they will do depends on their degree of persuasiveness.

For us, though, it would seem to suggest that the eurosceptic agenda does not exert much leverage with the Italian electorate, although one suspects that if a response was invited on immigration, a more EU-critical line might be apparent.

The strongly pro-euro line in Italy makes an interesting contrast to recent German sentiment – in terms of support for Alternative für Deutschland - and with the poll last June, which had only 43 percent of Germans voting to keep the euro, against 41 percent opting to return to their former currency.

What is fascinating, though is that, contrary to the received wisdom of a certain brand of British eurosceptic which sees in the EU a German plot to dominate Europe, on current form, it looks as if the our main support for bringing down the evil empire could come from Germany.

Certainly, this country, rather than Italy, seems a good place to look for allies.
COMMENT THREAD
Posted by Richard at 17:21