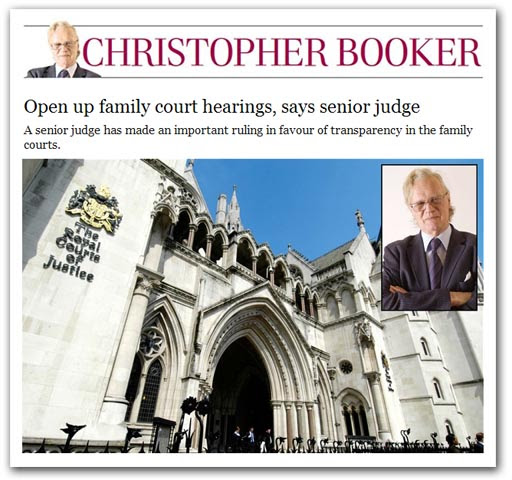 If Booker has been a bit quiet on the stolen children front over the last few weeks, there has been a reason. He has been the subject of his very own "super injunction", bestowed on him by High Court judge Nicholas "Mr Payout" Mostyn, at the behest of Sutton Council.

With criminal proceedings being discussed, on the basis of Booker's supposed "contempt of court", bully-boy Mostyn had demanded he attended court personally to hear the injunction confirmed, so his paper's lawyers had suggested he keep schtum for a while, to avoid inflaming the situation.

On the day, however, we were disappointed to learn that Booker's brief had so schmoozed the egregious Mostyn, to say nothing of shredding Sutton's case, that there was no question of the great man being banged up. Thus we were deprived of the fun of feeding him buns through the bars – in which had been secreted the obligatory hacksaw blades – or springing him by more direct means.

For once, though, Booker has become the story, with his own version of the trial in his column. Inexplicably, there is no comment thread on the column, although the news piece does have comments.

Says Booker, the hearing was the first occasion on which a judge was persuaded to agree to an injunction forbidding him from making any mention of a case. The fact that Mostyn was prepared to listen to the arguments – not that he had any option, as he was being set up for an Appeal Court hearing - and was thus prepared to lift it was "a salutary victory for the freedom of the press".

Giving a glimpse of the real battle, Booker goes on to say that this was "certainly welcome as far as it went". But, he says, the battle to lift the veils of secrecy that shroud the "secret courts" we already have is very far from over. "Behind those veils far too many cruel abuses of justice will continue to flourish unreported".