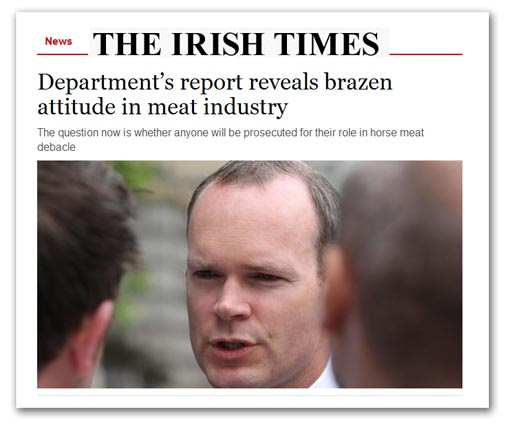 Simon Coveney, the Irish minister of agriculture yesterday released his government's official report on its investigation into the horsemeat affair. It has been crawled over by the Irish press, such as in theIrish Times (above), which reveals some of the excoriating criticism of the meat industry.

Bizarrely, although it was the Irish finding that triggered the whole of the horsemeat "scare", I have yet to see any reports in the British press, even though, as the Irish Independent picks up, a major Irish food company kept secret its discovery of horse meat in beef products last summer and was later found to have supplied contaminated meat found in school meals and Birds Eye products.

The company was slated for its "inexcusable" delay in notifying Coveney's department of its discovery of horse DNA in imported meat until weeks after the Europe-wide crisis broke. Coveney then criticised QK Meats in the Irish Parliamant, for "knowingly withholding information about problems in the supply chain".

He also criticised management at the ABP food group for failing to maintain proper oversight of its Silvercrest plant and warned that QK and ABP were "risking reputational damage to the Irish food sector itself".

The official report concludes that there was "no evidence that Silvercrest knowingly purchased horsemeat", but the company itself has admitted that "it had used non-approved suppliers in breach of specifications laid down by some of its major customers".

The "failure of management in this regard and the inherent disrespect for customer requirements", says the report, "has led to very serious consequences not just for the company concerned but has also put at risk the reputation of the entire agri-food sector in Ireland".

"It is a real concern that management oversight and corporate governance structures were not in place to prevent the failures detected in this investigation in Silvercrest", the report adds, noting that, Silvercrest did not fulfil its responsibility to ensure the quality and authenticity of the products it was selling. It "deliberately failed to respect its customer expectations and agreed supply contracts". 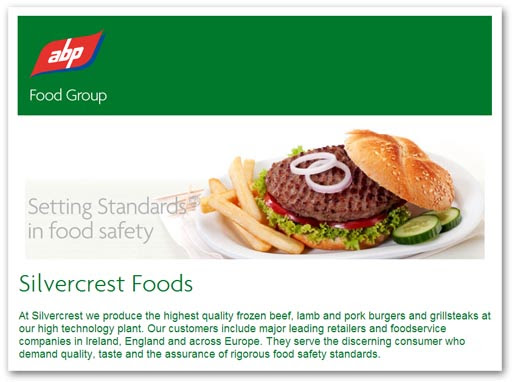 Now compare and contrast the corporate BS on the company website (above):

At Silvercrest we produce the highest quality frozen beef, lamb and pork burgers and grillsteaks at our high technology plant. Our customers include major leading retailers and foodservice companies in Ireland, England and across Europe. They serve the discerning consumer who demand quality, taste and the assurance of rigorous food safety standards.

Then, we get the usual litany of high-flown claims about monitoring and standards (illustrated below), with again reference to the BRC Global Standard that we identified yesterday, on the GA International website – the industry equivalent of "go-faster" stripes, with now just as much credibility. 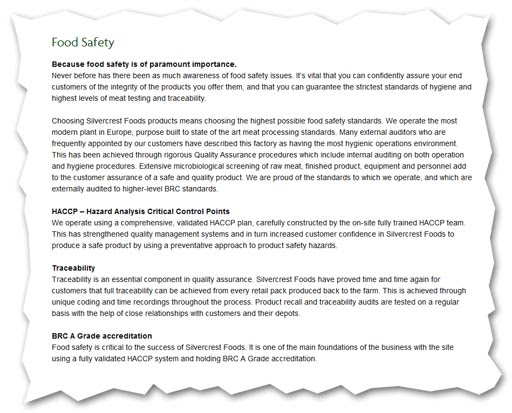 Also we see the corporate BS in full spate, as the company tells us:

We operate using a comprehensive, validated HACCP plan, carefully constructed by the on-site fully trained HACCP team. This has strengthened quality management systems and in turn increased customer confidence in Silvercrest Foods to produce a safe product by using a preventative approach to product safety hazards.

And yes, all the staff will have been "fully trained" in the procedures, and the plant will have been inspected by diligent "auditors", who will have rigorously filled in their tick-boxes and compiled their independent certification awards.

So to complete the charade, the company proudly displays its awards (below), including the 2012 SuperMeat & Fish Award. There is no truth, of course, that the company has been shortlisted for the best adulterated food award of 2013, sponsored by the Garda National Bureau of Criminal Investigations. 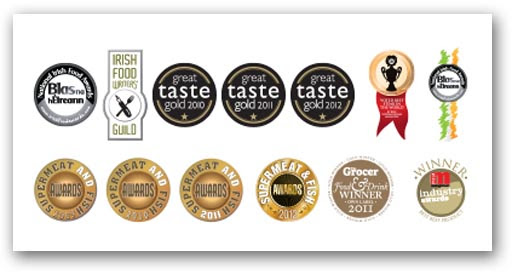 As we observed yesterday, though, this is precisely the BS that the European Union bought into when establishing its own legislation, supported by national enforcement agencies, turning standards into a corporate charade that puts the consumer last and least, at the end of a long list.

Says the Irish report, "The disclosure in Ireland of adulteration of beef products with equine DNA has prompted other authorities to examine this issue". And, surprise, surprise, "It transpired that what had been uncovered was a pan- European problem of fraudulent mislabelling of certain beef products".

"Almost all Member States have been affected by the problem. Indeed it has been uncovered outside of the European Union. It became a global problem affecting some large global companies and international food brands".

Corporate BS, is indeed a global problem, and it is going to take some fixing. Whether banks, the food industry, water providers or energy suppliers, they are all at the same game. The only difference now is that it is the meat industry's turn to be caught out. The question is, as the Irish Times asks, whether there are to be any prosecutions.
COMMENT THREAD
Posted by Richard at 23:38