EU politics: friends of the Mafia 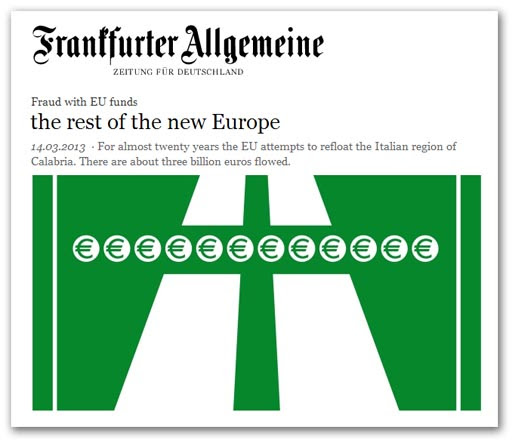 The circus is back in town, as the European Council meets in Brussels. This time, there were about 15,000 demonstrators (small by Brussels standards) protesting about "austerity", with the issues of jobs and growth to the fore.

This is because, by tradition, the Spring European Council is devoted to economic matters. And, to greet the event, Frankfurter Allgemeine Zeitung is running a long article about fraud, the Mafia and EU structural funds.

The story is not new and actually picks up on a piece this newspaper did last year when it reported on a "record" €400 million being diverted by fraud on road construction in southern Italy.

The specific focus this time is on Calabrai, and the appalling story of the upgrading (not) of the A3 highway. This ambitious project, now considered as the main European gateway for Colombian cocaine, is in a region which has so far absorbed €2 billion of EU subsidies.

The highway was built in the sixties and seventies, and connects the provincial capital of Reggio Calabria on the outermost tip of the boot to the northern city of Salerno, 300 miles further north.

Italy started in 1997 to upgrade the road and the EU contributed half a billion euros to the construction work. Since that time, the A3 has been one huge building site, a perilous obstacle course for every driver. It is built of concrete supplied by the Mafia, cut with sea sand.

It is so weak that structures fall apart as soon as they are built.. The A3 tunnel linings have crumbling and cracked pillars; the road surface is bumpy and beset with ripples. Nobody knows when it will ever be ready. 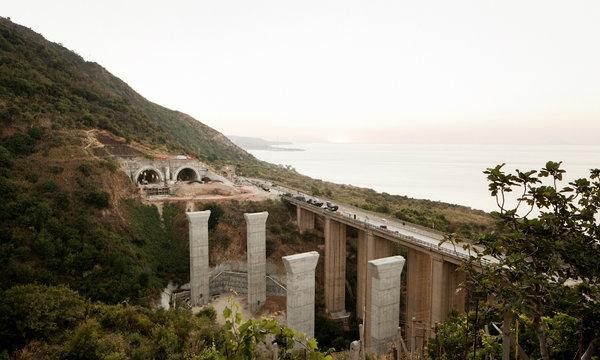 On 3 July 2012, investigators of the European Anti-Corruption Authority, Olaf, told the Brussels press corps that the worst case of fraud involving EU subsidies ever encountered had been between 2000 and 2006 in Calabria.

Some €453 million had been spent on roads, especially on the upgrade of the A3, of which €205 million came directly from the EU structural funds. Local politicians, officials and businessmen were bribed by the Mafia to fix contracts, resulting in an epidemic of overcharging or the presentation of invoices for services never rendered.

But despite this, and despite reports to the contrary, there is no obligation on Italy to pay back the money. It has simply been required to spend the equivalent amounts on another, "clean" project. MEP Ingeborg Gräßle, sitting on Budgetary Control of the European Parliament, was not alone in angrily querying whether Italy had any "clean" projects.

What comes over here is the weakness of Olaf. It makes threats, but they have no teeth. Barely 25 officials are involved with the subsidies from the Structural Funds.

Nevertheless, the EU was told about the A3 in 2006, and informed of "serious irregularities". Between 2006 and 2010, what the EU Commission unearthed was so outrageous that it stopped funding the project. But, from the very first moment, the project had been "under the influence of the Mafia".

This has been described by the Anti-Mafia Commission of the Italian Parliament. Emilio Santillo, Director of Police in Reggio Calabria during the seventies described the activities of the 'Ndrangheta – the Calbrain Mafia - in a detailed report.

Each family was given a special section. They then installed at each construction site one of their men, the "site manager". The construction companies paid these "bosses" three percent of the estimated costs as protection money. They also had to let them dictate who they had hired: mostly young, unemployed men from nearby villages.

The "bosses" then forced the companies to work only with subcontractors, which were controlled by the gangs, and only with suppliers who were approved by the Mafia. Inevitably, materials supplied were of catastrophically poor quality and overpriced.

With the A3 funding, the EU has since 1994 invested almost three billion euros of taxpayers money in Calbria. This was to produce a "new Calabria" of which EU Commissioner Michel Barnier boasted in 2001.

Yet, as to what the money has actually achieved, there has been no formal evaluation. The EU Parliament produced in 2009 a report which questioned the effectiveness and value of aid programmes in southern Italy, as long as the "threat posed by organised crime" continues to exist.

But, even then, road construction was only one of the many criminal enterprises. Drug trafficking, money laundering, extortion, property scams and even food fraud, are all grist to the mill.

Last week, an Italian paper noted that the 'Ndrangheta had become one of the world's biggest criminal organisations. Experts say it is richer and more powerful than the Sicilian Mafia. Cocaine is thought to be its biggest source of revenue, along with extortion and money laundering.

It controls the European cocaine trade, and has close ties with south American drug cartels. It also operates in northern Europe, Australia and Canada. And decades of EU subsidies, paid for mainly by British and German taxpayers, have helped them acquire their riches.

Today, oblivious to the effects of their policies, EU leaders are meeting to discuss growth and jobs. Yet, on the basis of the current track record, the main beneficiaries will be Mafia gangsters and the drug cartels. What is so significant, though, is that newspapers such as FAZ are choosing to remind their readers of it.
COMMENT THREAD
Posted by Richard at 23:36