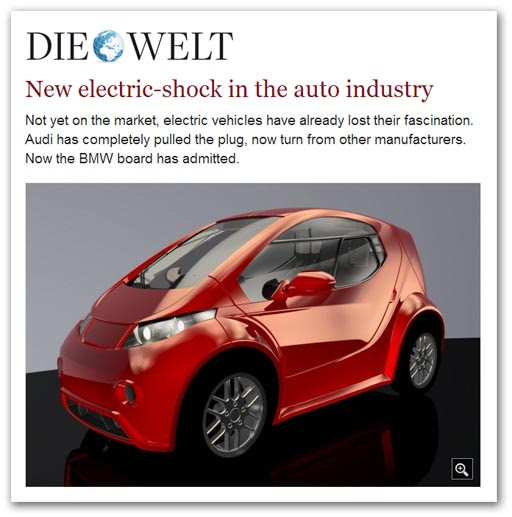 It was in October last year that Handelsblatt indicated that all was not well with the plan to produce (and sell) a million electric cars in Germany by 2020.

Now, despite the pivotal role of electric cars in future energy management systems, the German car industry is effectively giving up the struggle to produce electric models and will now concentrate on producing hybrid vehicles, and on fuel cell technology.

According to Die Welt, Audi has "completely pulled the plug" and BMW is not going to expand its range beyond its compact car.

Nor are the Germans on their own in finding electric cars hard going. Bloomberg reports that Nissan has put its electric-vehicle business under the direct supervision of the chief operating officer after sales of the Leaf missed the company's expectations.

Deliveries of Nissan’s flagship electric car in the US, we are told, failed to reach even half its 20,000 target for last year, a "blow" to the company's Chief Executive Officer Carlos Ghosn. He forecast that electric cars would become so popular that they would account for at least ten percent of global car sales by the end of the decade.

The problem is highlighted by this report, which makes the obvious point – which has clearly eluded Ghosn – that the electric car is a short-range vehicle, and an extremely expensive option.

Closer to the real world, therefore, is Ralf Speth, chief executive of Jaguar Land Rover. He says that electric cars will never be a mass-market solution to climate change and should not get government subsidies.

"The batteries are too expensive", he says, "the customer must be very rich, and can only use [them] in mega-cities [where there are charging points]". He asks: "Should we do it only for the rich?" In his view, it would be better to wait until the technology improves and there is a greater benefit to the environment.

Still, though, there are those trying and failing, such as the Better Place electric-car company in Israel, which has managed to pile up €500 million in losses in selling 750 cars. Clearly, unless you want to waste a great deal of money, electric cars are not much use for anything.
COMMENT THREAD
Posted by Richard at 22:38