Energy: after the thieving bankers 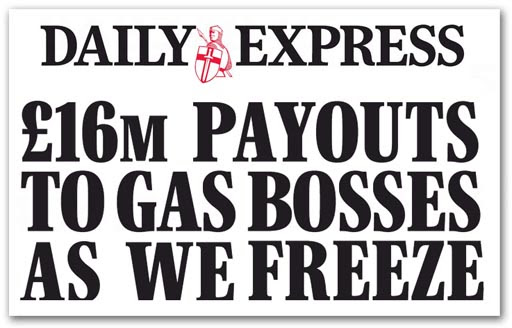 The Daily Express is trying to steal a march on the Mail in the outrage stakes, highlighting on its front page the latest example of corporate greed. This time it is Centrica directors, milking £16 million in salaries and bonuses from the cash mountain acquired by British Gas.

Chief executive Sam Laidlaw raked in almost £5 million, with his salary of £950,000 topped up with bonuses and long-term share awards of over £2.6 million, plus benefits. Outgoing British Gas managing director Phil Bentley saw his total remuneration leap to £3.1 million in 2012 from £2.1 million a year earlier. His basic salary was £635,000.

One is also less than impressed by the mouthings of sundry trades unionists, including TUC general secretary Frances O'Grady. The paper has her saying, "At a time when the poorest households are struggling to make ends meet and are spending over a quarter of their incomes on fuel bills, these huge payouts are insensitive beyond belief".

Nevertheless, O'Grady has a point – and even more so does Unite general secretary Len McCluskey, declaring, "It is obscene and is the straw that could break the back of corporate excess".

He adds, "Enough is enough. This excessive greed sees casino bankers and the corporate elite running British business pocket millions while working people struggle to pay their soaring household bills. It must stop. As Britain goes through the worst March weather in half a century, the sun shines brightly on Centrica's bosses while those struggling to pay the bills shiver".

Yet, in this country, the government objects to caps on executive pay, and the people don't have a choice - unlike Switzerland. But, since the EU is proposing controls, this plays into the hands of the evil empire. It is taking a populist approach to the issue, where the British government is loathe to act.

Mr Cameron, therefore, would be unwise to ignore this. There is a strong and genuine resentment of the pillaging of these corporate thieves. No one with any sense has any objections to executives of major enterprises being well paid, but multi-million salaries and bonuses paid to corporate employees are theft, pure and simple.

What the powers that be possibly don't appreciate is the message this sends out, and the moral implications. How can the State condemn, or rightfully punish, the anyone stealing property, when it condones theft on such a vast scale?

And, while the State might tolerate this situation, politicians need to be aware that public patience is limited, and resentment is growing. "Last chance saloon" doesn't even begin to describe it.
COMMENT THREAD
Posted by Richard at 12:15