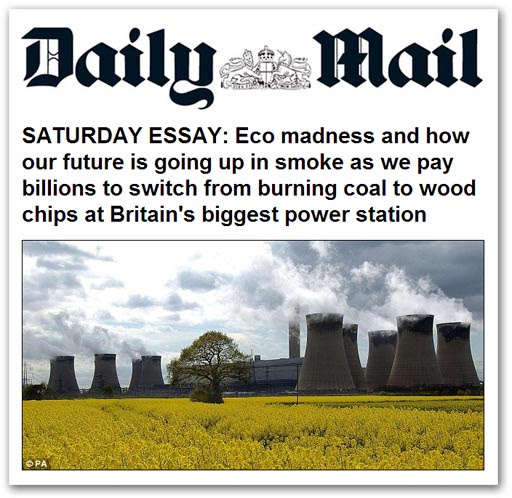 In the Saturday essay for the Daily Mail, Booker dissects Britain's energy policy by looking at the giant Drax power station in Yorkshire.

There is, he writes, no better symbol of madness than turning one of the biggest and most efficiently run coal-fired power stations into a world of eco-lunacy as it embarks on a £700 million switch away from burning coal in its six colossal boilers to devour millions of tons a year of wood chips instead.

Most of these chips will come from trees felled in forests covering a staggering 4,600 square miles in the USA, from where they will be shipped 3,000 miles across the Atlantic to Britain, to fulfil the insane pursuit of reducing CO2 emissions.

Unlike coal, which is now demonised as a filthy, planet-threatening pollutant, biomass is considered ‘sustainable’, because it supposedly only returns back to the atmosphere the amount of CO2 it drew out of the air while the original tree it came from was growing.

Yet coal is still by far the cheapest means of creating electricity. But the Government is so committed to meeting its own and the EU's targets for reducing Britain's "carbon emissions" that it is now going flat out to tackle the problem on two fronts — both of which forced the changes at Drax.

First, the Government wants to use a carbon tax to make burning fossil fuels such as coal so expensive that, before too long, it will become prohibitive for power companies to use them.

A new carbon tax will be introduced in three weeks' time, and applied to every ton of carbon dioxide produced during electricity production. The tax will start at a comparatively low level, but rise steeply every year so that, within 20 years, the cost of generating electricity from coal will have doubled and it will no longer be economical.

Second, the Government is determined to boost all those "carbon neutral" — but currently much more expensive — means of making electricity, such as wind farms, nuclear power and burning biomass. It hopes to achieve this by offering a host of subsidies, paid for by every household and business through electricity bills.

What forced Drax to embark on the switch from coal to "biomass" was ministers' decision last year to give any coal-fired power station which switched to "biomass" the same, near-100 per cent "renewable subsidy" that it already gives to the owners of onshore wind farms.

Tackling the problem: The Government is determined to boost all those 'carbon neutral' - but currently much more expensive - means of making electricity, such as wind farms, nuclear power and burning biomass.

When the experts at Drax did their sums, they could see how, if they stayed with coal, they would gradually be priced out of business by a carbon tax which will eventually make their electricity become twice as expensive. In terms of hard-headed realism, the Government was giving them little choice.

And that is the story Booker tells in his piece: how sensible, well founded business which produces seven percent of the nation's electricity, has been forced to double the cost of the electricity it produces, joining the ranks of the eco-loons in the process. Read what Booker has to say, and weep.
COMMENT THREAD
Posted by Richard at 23:15