EU politics: settlement with the sinners 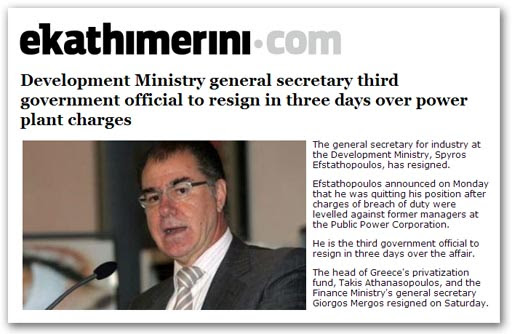 A juicy little scandal is sweeping through Athens, with the local English-language newspaper,Ekathimerini telling us of multiple resignations of high officials. These have arisen after alleged corruption over the commissioning of a natural gas electricity plant in central Greece in October 2007, which was completed last year.

Embarrassingly for the Greek government, the man at the centre of the storm is a senior finance ministry official and head of Greece's privatisation agency, Takis Athanasopoulos. He has now been charged with "breach of duty, with aggravating circumstances under the law about public embezzlement".

Greece, says Reuters has stepped up prosecutions of politicians and businessmen in recent months amid rising public anger against a wealthy elite partly blamed for dragging the country to the brink of bankruptcy.

On the other hand, when such high officials are charged with embezzlement, it shows that Greece must be a primitive country. Their officials and industry leaders have not yet learned to institutionalise and thereby legitimise such theft.

All they have to do is set up remuneration committees, manned by their pals, and award themselves obscene salaries and bonuses. As long as this is done in the open, in accordance with "procedure", they can steal as much as they can carry and even get knighthoods for their trouble.

Lacking such skill in advanced peculation, this – in the words of commenter Costas Iordanidis - has brought Greece to the point where the political system is unravelling.

He notes that two of the country's highest-profile politicians – former Thessaloniki Mayor Vassilis Papageorgopoulos, who also served as a New Democracy minister in the 1980s, and former Socialist heavyweight Akis Tsochatzopoulos, who also hails from the northern port city – have both been dragged to prison in what has been called "the settlement with the sinners".

In the past, writes Iordanidis, these politicians were supported by tens of thousands of PASOK and New Democracy voters, who placed trust in the integrity of their character or at least in their ability to manage public matters. The country's economic establishment was keen to schmooze with Tsochatzopoulos - he was a minister with nationwide influence – to advance their material interests.

In what has resonance here, Iordanidis then says that innocent supporters were disillusioned and the corrupt ones were ridiculed. Some, he says, are now worried about the potential repercussions as the scandalous deals with these politicians come to light. Greece's already discredited political system has suffered a devastating blow.

Some critics say that their punishment was, perhaps, too harsh. Others say that the judges were influenced by the overall mood or the reductions to their salaries – cries and signs of confusion from a system that is coming apart.

It's hard, Iordanidis observes, for traditional parties to accept their discrediting in such a short period of time. It's even harder for interests outside the political system to grapple with what is happening. But, he concludes, we are witnessing the dismantling of the Greek political system. And this is just the beginning.
COMMENT THREAD
Posted by Richard at 22:37