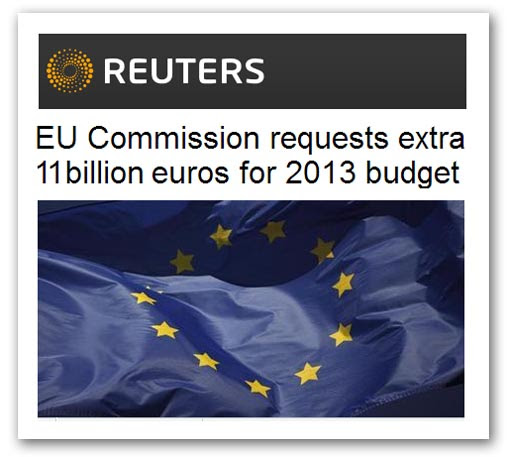 Left over from yesterday is the latest in the ongoing battle of the budget, this round concerning the 2013 tranche.

Already set at €132.8 billion, the Commission has cone up with an "amending budget", adding another €11.2 to that figure, in an attempt to by-pass the cap on the multi-annual spending target. It would represent an 8.4 percent increase over the level already agreed in December, pushing annual EU spending to its highest level ever.

The extra funds must be approved by both the European Parliament and the Council – the latter by qualified majority voting – which means that the UK cannot block them, even though Downing Street has pledged to fight the proposal which would cost us about €1.2 billion.

The European Parliament, which has been calling for extra funding, is most likely to approve the amending budget, and is threatening to block the multi-annual agreement unless the Council caves in, something about which Schultz has made himself abundantly clear.

Meanwhile, the Commission is not pulling any punches. "This cannot come as a surprise", EU budget commissioner Januz Lewandowski says, referring to the current gap between projected income and commitments. "The ostrich policy can only work for so long: postponing payment of a bill will not make it go away".

Britain's Financial Secretary to the Treasury, Greg Clark, has nevertheless described the Commission's proposal as totally unacceptable. "It is extraordinary that the Commission should demand an increase in the EU budget that is bigger than the rescue package that was agreed for Cyprus earlier this week," he says.

And the point made is a good one. Considering all the hullabaloo there has been about €10 billion to the Cypriots, for the Commission to dump another €11.2 billion on the tab is more than a bit tiresome.

Lewandowski, though, is unrepentant. In recent years, he says, EU budgets had been "increasingly below the real needs based on estimates from member states". Now this is creating a "snowball effect" of unpaid claims transferred to the following years.

This is what originally proved to be the breaking point on the multi-annual budget, with the Parliament refusing to take a hit in order to pay outstanding bills. Now it is coming back to haunt Mr Cameron, further eroding his budget "victory" last year.

The interesting this is that the use of the amending budget was flagged up in November 2010, and the funding gap was highlighted last October. Then, we wrote that, when the "colleagues" come round with their begging bowl, Mr Cameron is going to have to find about £1 billion to put in the kitty.

Thus, Lewandowski is absolutely right. This shouldn't come as a surprise. But that does not stop it being a major embarrassment to Mr Cameron. The last thing he wants is to have to find another €1.2 billion for the EU, or the prospect of demonstrating his impotence when it comes to trying to stop the "colleagues" taking it.

But Mr Cameron want to stay in the EU and, if he does, political embarrassment is part of the personal price he must pay.
COMMENT THREAD
Posted by Richard at 17:30