EU legislation: a confusion over bonuses 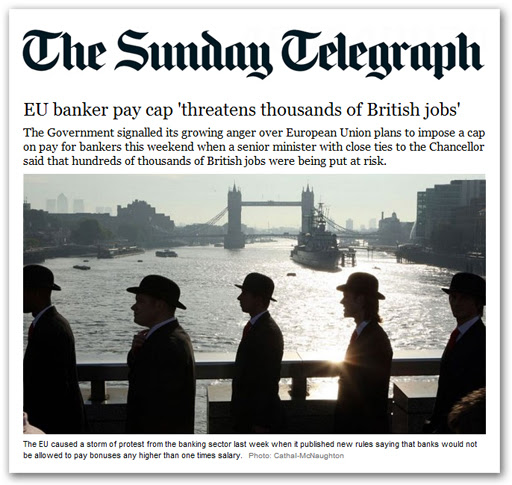 Running in the Sunday Telegraph today is yet another story in which the journalist fails completely to understand the complexities of the EU legislative process, thereby presenting a false impression of what is going on.

This is the bankers' bonuses controversy, which the paper has got so wrong that its headline refers to bankers' pay – which is not in the frame. The issue is about a cap on bonuses, despite the STheadlining: "The Government signalled its growing anger over European Union plans to impose a cap on pay for bankers".

Notwithstanding that the EU probably does not have the power to regulate either pay or bonuses – something which Booker deals with in his column - another crucial issue here is the status of the proposal.

Those with a basic knowledge of EU treaty law and procedures will know that, with very few exceptions, the right of proposal is reserved to the European Commission, which has an absolute monopoly in this department.

And it is here that the confusion starts to descend. The legislative proposal in the frame is an amendment to Directive 2002/87/EC, in the form of COM(2011) 453 final, whicgh was published on 20 July 2011. And a search of the text of the legislative draft shows that there is no reference whatsoever to the regulation of bankers' bonuses.

Strictly, speaking, therefore, there is no "EU proposal" or "plan" to regulate bonuses, insofar as only the European Commission is in a position to make a formal proposal.

Nevertheless, the ST is not the only media organ confusing itself and everyone else, as the BBCtells us that "it seems that the European Union is poised to cap bank bonuses across the 27 members in the trading bloc".

Here, the diffident "seems" is probably appropriate, as we are told that "the agreement was reached during eight hours of intense talks in Brussels between members of the European Parliament, the European Commission and representatives of all the governments".

To suggest an "agreement" though, is at best premature and, in this context, most probably wrong. What we are dealing with, once again, is our old friend the ordinary legislative procedure, where a legislative proposal from the Commission goes simultaneously to the European Parliament and the Council, each of which institutions draw up their "common positions", on which they then vote.

In the case of the European Parliament (EP), the common position was drafted by the Economic and Monetary Affairs Committee, under the guidance of rapporteur Othmar Karas, an Austrian MEP and member of the EPP (pictured below). 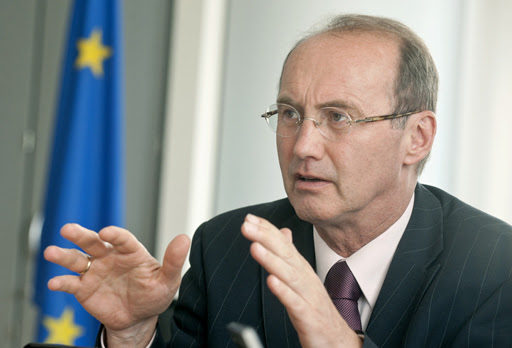 However, the EP's common position was actually drafted on 30 May 2012 – last year -  and, interestingly, the report also does not include any formal amendments calling for the regulation of bonuses.

Even after this report had been prepared though, for instance on 29 June 2012, Karas was calling for "tougher rules on banker bonuses".

There was, he said at the time, "no cap on bonuses", but he wanted a fixed ratio between the fixed salary and the bonus. "My suggestion", Karas explained, "is to limit the ratio of fixed salary to bonus at 1:1. Bonuses must not be a driver for short-sighted and risky action".

As of 28 February this year, Karas seems to have got his way, after an informal "trialogue" between Commission, Parliament and the Council Presidency.  The details of this "agreement" come in apress release from the European Parliament, and a statement by the Irish presidency. Given the informal nature of the procedure, the Irish correctly refer to a "provisional agreement".

As it stands, there is as yet no formal documentation published, which sets out the agreement. Thus, it is a long way from a formal EU proposal. Officially, its status is of a proposal from the rapporteur, Othmar Karas, which has yet even to be agreed by the Economic and Monetary Affairs Committee. And even with that approval, its must then be voted on by the entire Parliament, with the first reading scheduled for 17 April 2013.

From there, it is far from plain sailing as there are potentially two further readings, with an important twist. If any parliamentary amendment does not have the approval of the Commission (and it is hard to see how this one could), then under the procedure, it requires unanimous approval by the Council. In effect, any Member State – including the UK – has a veto.

Such complexities are very much for the future, but for the present, we are ill served by a media which seems ill-equipped to report on EU affairs and constantly demonstrates that reporting on anything more complex than a TV soap is beyond its capabilities.
COMMENT THREAD
Posted by Richard at 23:52