Horsemeat fraud: back in the news 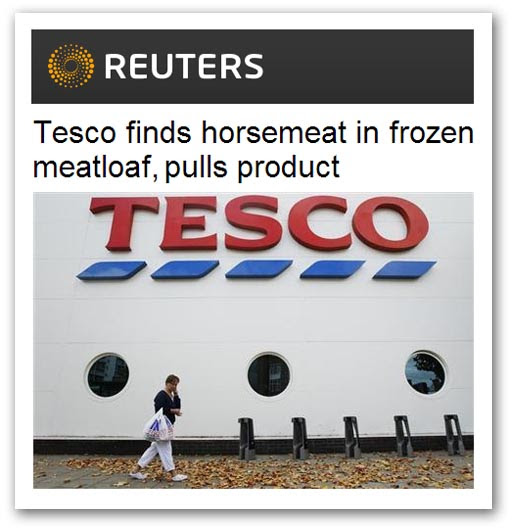 After something of a pause, food adulteration has suddenly made a brief reappearance. AnotherTesco product has been found to contain two to five percent horsemeat.

This is 600g packs of frozen meatloaf, sold as "Tesco Simply Roast Meatloaf", manufactured between October 2012 and January 2013 at Eurostock in Craigavon, Northern Ireland. The product has now been withdrawn and Tesco is telling the world that said it would complete its own investigation into tracing the "source of contamination" before it took a call to continue with the supplier.

If Tesco is still referring to "contamination", that suggests it is either being a little bit coy about being associated with the "adulteration" word, much less admitting to their involvement in what is a growing epidemic of fraud.

However, if the corporate Tesco is playing games, it is not alone. Food adulteration never actually went away. Over the weekend, for instance, the Scottish Sunday Mail reported that one in three curries tested in Scottish restaurants were "fake", using cheap beef instead of lamb in popular Indian dishes such as bhoona and korma.

Substitution was found in 46 of 129 restaurants tested; 33 contained no lamb at all and the remaining 13 had some lamb, a raw ingredient priced at about £9 a kilo, adulterated with cheaper cuts of beef which could be bought for £5 kilo. Officials have not so far taken any action against the restaurants, but are trying to track down the suppliers who, in some cases, are as far away as Birmingham.

Slightly further away is Romania, where Doctor Yordan Voynov, Executive Director of the Bulgarian Food Safety Agency, reveals that his agency has discovered unreported horsemeat instead of veal in four products: boiled smoked sausages and one cold smoked flat sausage. That is four out of 25 samples, the first batch of 100 samples taken from the commercial network.

France also has been testing and admits to horsemeat having been found in pre-cooked beef meals prepared meals from four companies other than the already-identified Spanghero-Comigel.

So far, out of 140 tests, two of the new companies, Covi and Gel Alpes who supply William Saurin and Panzani, were associated with Dutch firm Draap Trading – which has already been implicated as a source of the horsemeat. The two others were Davigel (Nestlé) and corned-beef maker Toupnot, but the reports says they have had very little horsemeat.

France, though, has not just had horsemeat to contend with. Like the Americans, they too are aware of the possibility of large-scale fish substitution . Anti-fraud agents from the DGCCRF have been ordered by Consumer Minister Benoît Hamon to check sole, halibut and sea bass, to ensure that cheaper fish has not been substituted.

DGCCRF agents say they have uncovered 15,700 frauds in 740,000 checks in 142,000 businesses last year and Hamon says that, despite a 16 percent reduction in staff over the past five years he was ringfencing jobs in 2013. He also called for increased use of "mystery shoppers" to uncover fraud.

The Germans, of course, have had their aflatoxin in animal feed and their organic egg scandal to deal with. And now, it seems, the Hungarians have something fishy going on with eggs – to coin a phrase. Recently, the Customs and Finance Guard discovered in a warehouse in the southeast of the country 864,000 undeclared eggs of unknown origin, worth over €100,000. The goods have been seized and proceedings initiated against the owner of the warehouse.

Alert veterinary officials in Poland have also been busy, raiding a manufacturer in the Bydgoszcz district. It is alleged to have mixed rotting meat with expired shelf-life meat to produce sausages. To date, 25 military units have been supplied with meat from this sausage company.

Iceland went to the other extreme, their investigators finding that one meat product tested for horsemeat adulteration passed the test with flying colours, but only because no meat at all was found in the product.

Into this heady mix, though, wafts the Consumers Association (CA), full of its own importance, telling "government" what action it should take.

"The answer is simple, something must be done", is almost the tenor of the advice, as it calls for, "more surveillance that's better coordinated", even though the chances of picking up adulteration from random sampling across the whole range of products on sale is slight indeed. The CA wants Defra and the FSA to improve co-ordination, but there is nothing about involving the international police agencies, which are in the forefront of the fight.

The same limited vision afflicts their advice on "tougher enforcement", with "tough penalties" for those prosecuted. Tough penalties, there already are.  Penalties for fraud include prison. But nothing is said of the effect of "due diligence" or of the role of paper-based controls, which have weakened the control system. Instead, the CA calls for better "traceability", and "improved labelling", even though neither would have an impact on food fraud.

And the one thing we have not seen throughout the continent is the structures of the control services having any impact on the prevalence of fraud. Yet the all-knowing, all-wise CA demands that the split between food standards and labelling issues between the FSA and Defra should be ended, with the responsibility for labelling and standards moved back to the FSA.

Never mind that, throughout Europe (and most developed countries), there is a split between food safety and food standards activities – for good reasons. The skill-sets required are different, and the disciplines are very separate.

What we see, though, is the failure to recognise that we are talking about criminal enterprise, with a strong international dimension. Beyond the limited vision of the Consumers Association, we need to see police and fraud specialists in the loop. Once again, it has to be emphasised, this is primarily a criminal issue, something which the CA clearly does not understand.

More usefully, we get Petra Wissenburg corporate quality projects director for Danone telling us that we must think like criminals to beat the food fraudsters. And that again is another skill set.

The fish products industry adds that the industry sectors must cooperate and work together. That means taking food fraud seriously, which even now – to judge from Mr Tesco – is not yet happening. But only when fraud is seen for what it is will we start to see some serious progress.
COMMENT THREAD
Posted by Richard at 11:33