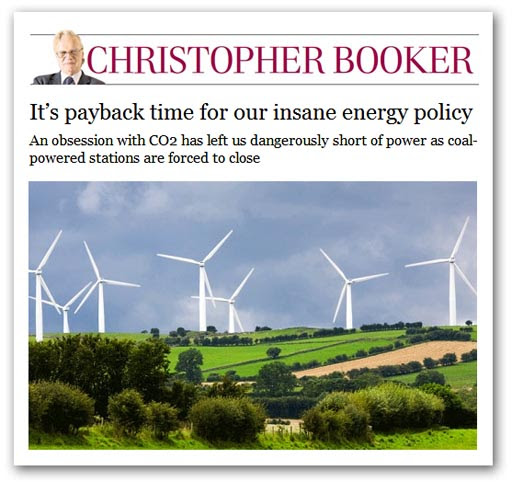 It's digging out day today. I spoke to a couple of our neighbours who tried to get out yesterday, and failed. Others made it, but it was touch and go whether they would get back. On balance, it was the right call not going to London, although I'm sorry to have missed the fun.

But the very fact that going to London was potentially such a perilous venture brings us straight to the Booker column, where he remarks on the coldest March since 1963, and on the continuing snowfall.

Alongside that, we have the news that there is barely 48 hours' worth of stored gas left to keep us warm, while the head of our second-largest electricity company, SSE, has warned that our generating capacity has fallen so low that we can expect power cuts to begin at any time. It seems the perfect storm is upon us, writes Booker. 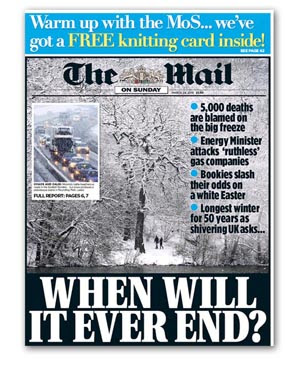 The Mail on Sunday is running the weather on its front page, asking, "When will it ever end?". It notes that 2,000 extra deaths were registered in the first two weeks of March, and over three thousand in February.

Campaigners at Age UK, which says 26,000 people die needlessly in winter every year, said the current weather could prove deadly for thousands more. Director general Michelle Mitchell said: "Colder, harsher winters tend to lead to an increase in life-threatening conditions such as heart attacks and strokes which in turn leads to a high rate of excess winter deaths". For every one degree drop in average temperature, there are around 8,000 extra deaths.

Even to this day, though, the warmists quote the great European heatweve of 2003, claiming 70,000 deaths as a direct result of the heat.

Extrapolate the excess deaths in the UK this season, to come up with a Europe-wide figure, and doubtless it will far exceed the 2003 figure. Yet the warmists are silent about the effects of the cold, and especially about their ambition to increase the price of energy to promote reduced use, supposedly to cut CO2 emissions.

It is this grotesque mishandling of Britain's energy policy by the politicians of all parties that Booker comments upon, brought about by the pursuit of their "childish chimeras of CO2-induced global warming and windmills". This. says Booker, "has been arguably the greatest act of political irresponsibility in our history".

Three more events last week brought home again just what a mad bubble of make-believe these people are living in. First, under the EU's Large Combustion Plants Directive, we lost two more major coal-fired power stations, Didcot A and Cockenzie, capable of contributing no less than a tenth to our average electricity demands.

Then we saw a French state-owned company, EDF, being given planning permission to spend £14 billion on two new nuclear reactors in Somerset, but which it says it will only build, for completion in 10 years' time, if it is guaranteed a subsidy that will double the price of its electricity.

Finally, of the triumvirate, hidden in the small print of the Budget, were new figures for the fast-escalating tax the Government introduces next week on every ton of CO2 emitted by fossil-fuel-powered stations, which will soon be adding billions of pounds more to our electricity bills every year.

Within seven years this new tax will rise to £30 a ton, and by 2030 to £70 a ton, making it wholly uneconomical to generate any more electricity from the coal and gas-fired power stations that last week were still supplying two thirds of our electricity.

Put all this together and we see more starkly than ever the game the Government is playing. It knows that no company would build wind farms unless it is given subsidies that, in effect, nearly double or treble the price of its electricity. The Government will only get CO2-free nuclear power if it promises it an equal subsidy. And now the Coalition is also hell-bent on driving our much cheaper and more reliable coal and gas-fired plants out of business, by imposing a carbon tax that will not only eventually double the cost of their electricity, but also make it impossible for them to survive.

So mad is this policy of "double-up all round" that it is driving even the largest and most efficient power station in the country, Drax, capable of supplying seven per cent of all the power we use, to switch from burning coal to wood chips, imported 3,000 miles across the Atlantic from the US. And how has the Government forced Drax to do this? By giving it a subsidy on wood chips that doubles the value of its electricity, while putting an increasingly prohibitive tax on coal.

This is all insane in so many ways that one scarcely knows where to begin, except to point out that, even if our rulers somehow managed to subsidise firms into spending £100 billion on all those wind farms they dream of, they will still need enough new gas-fired power stations to provide back-up for all the times when the wind isn’t blowing, at the very time when the carbon tax will soon make it uneconomical for anyone to build them.

So we are doomed to see Britain' s lights going out, all because the feather-headed lunatics in charge of our energy policy still believe that they' ve got to do something to save the planet from that CO2-induced global warming which this weekend has been covering much of the country up to a foot deep in snow.

Meanwhile, the Indians are planning to build 455 new coal-fired power stations which will add more CO2 to the atmosphere of the planet every week than Britain emits in a year.

Thank you, David Cameron, leader of "the greenest government ever", Booker concludes. Thank you, Ed Miliband, father of the Climate Change Act, the most expensive suicide note in history. Between you, you seem determined to switch off our lights, lock the door and throw away the key. We owe you more than we can say.