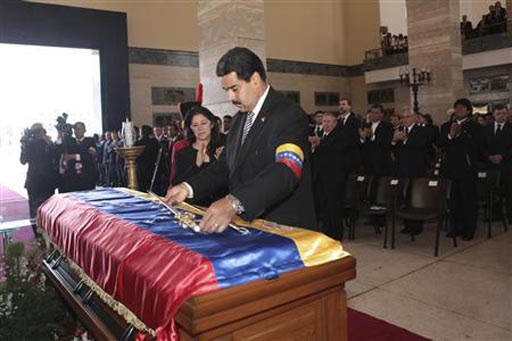 Since the proprietor and chief author of this blog is very careful to avoid listening to the Today programme or watching Channel 4 News, I have had to keep him posted in recent days on the remarkable coverage given by the BBC and the Channel 4 team to events in Caracas and the death of that legendary hero of our times, Hugo Chavez.

In its general tone this has been so striking that I was tempted to write about it in this week's Sunday Telegraph column, until more pressing subjects intervened.

From the moment Chavez's death was announced, the BBC went into adulatory meltdown. "Charismatic and controversial" was the mantra phrase repeated half a dozen times before 9 o'clock that morning, to mark the passing of "the People's President", who among his many other achievements could have boasted that, under his benign rule, Venezuela became in 2010 the country with the highest murder rate in the world.

Where these reporters really came into their own was when they could wander round the streets of Caracas marvelling at such an astonishing explosion of collective grief, as vast crowds spontaneously gathered to mourn the passing of the man they looked on as their "Father".

According to Channel 4's Matt Frei, he could think of nothing remotely to compare with it since the scenes in Rome which marked the passing of Pope John Paul II. To the BBC, the comparison was with the upwelling of national grief at the death of Diana Princess of Wales.

As millions turned out for the lying-in-state – and 30 world leaders converged on Caracas for the state funeral, led by the rulers of some of the world's nastiest and most despotic regimes, such as Ahmedinajad of Iran, Lukashenko of Belarus and Raoul Castro of Cuba – I was irresistiibly reminded of the not dissimilar scenes in Moscow in 1953 when Stalin likewise lay in state in the Hall of Columns.

By a brilliant coup de theatre, Chavez even managed to die on 5 March, exactly 60 years to the day after the death of Stalin. And what a masterstroke it was to announce that Chavez's corpse is to be embalmed and put on permanent public show as an object of worship, just as was Stalin's until he had to be secretly hurried away for burial seven years later after being denounced by his successor Nikita Khruschev.

Accounts of the mood in Moscow in 1953 are remarkably reminiscent of what we have seen being reported on in Caracas, the vast, grief-stricken crowds counted in millions, the interviews with sobbing citizens, the sense of a people suddenly robbed of the man who had given them and their nation an elevated sense of identity.

To be fair, at least Matt Frei gave a brief interview with one man who was not entirely carried away by the general mood, who refused to say that he was sad at Chavez's passing, but then also refused to explain why.

In terms of group psychology, obviously these two events had much in common, as a monster whose presence had dominated all their lives for so long departed, leaving a horrible sense of vacuum behind.

But at least in Moscow in 1953 the crowds became so great that they had to call in the tanks of the Red Army, leaving hundreds of people crushed to death. When it comes to real monsters, the friend of Ken Livingstone and George Galloway was no more than a beginner.

PS. If you want to know more about Chavez, it's no good looking at Wikipedia. His entry has been taken over by Friends of Chavez, just as those on climate change have been hijacked by the warmists.
COMMENT THREAD
Posted by Richard at 16:21