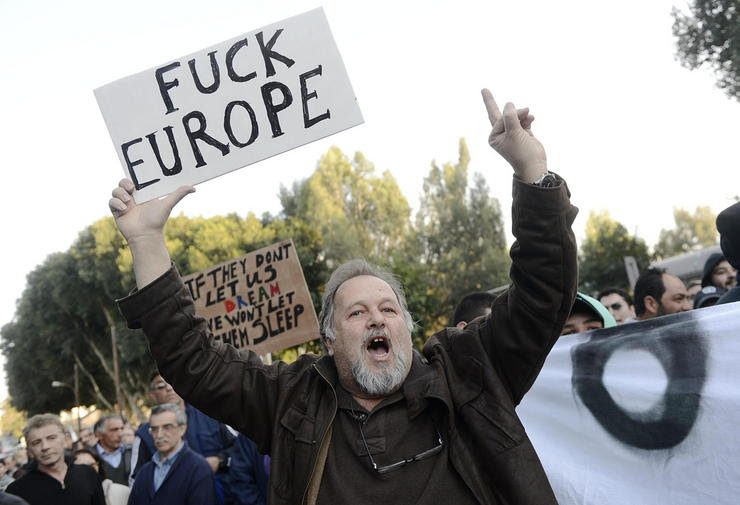 Whatever else there is to say about the Cyprus situation, it is fair to say that it has turned out to be a PR nightmare for the "colleagues" – with this AP photograph doing the rounds (above). This has been an enormous boost to the anti-EU cause.
However, there is not much sympathy for the Cypriots to be found in Handelsblatt. For years, it says, the banks on the island nation have operated risky businesses, investing in high-interest loans, including those from Greece. The business model seemed to work, at least for a while, allowing the total assets of the island's banks to expand to seven times the total economic output of the country. Over term, this has benefited their depositors. An account with a Cypriot bank has earned more than 24 percent. Someone placing €10,000 in January 2008 - the year Cyprus adopted the euro – would have earned €2,420 by today. That is almost double what German saver might have earned with a similar account in Germany. According to data from the Bundesbank, the increase would have been about €1,300. Thus asks Dirk Becker, a bank analyst at Kepler Capital Market: "Could banks in countries such as Cyprus and Greece to pay higher interest rates because their savers are more deserving?"As always, therefore, there are two sides to the argument. The levy is a blunt instrument , but the there must have been a core of "investors" who should have known that nothing is for nothing. The lesson is there in the high interest rates offered by Icelandic banks. However, amongst those hit are the less sophisticated Cypriots. They can hardly be blamed for putting their money in their own national banks, yet they are being forced to for the sins of their bankers, many of whom have become very rich on the proceeds of the bonuses paid. One way of separating the sheep from the wolves would, of course, be to penalise offshore depositors, leaving residents' accounts untouched. But that would be contrary to EU treaty law – discrimination on the grounds of nationality. The "colleagues" are, therefore, hoist with their own petard. They cannot target the real speculators, for fear of falling foul of their own treaties. Hence, there are working on the idea of a €20,000 euro cut-off, below which the levy will not apply. Nevertheless, the move is still being described as financial genocide. "We feel like during the war", says president of the Chamber of Commerce and Industry in Limassol, Philokypros Andreou. "We feel like in 1974 when the Turks invaded. Today there is only one difference: The weapons  directed against us are not more guns, but financial instruments. For us this is a financial genocide".As the implications of what has been done become clearer though, the Cypriot parliament is firming up against the scheme, while the Cyprus Central Bank warns of massive capital flight. Meanwhile, as the scheme unravels, there are fears mounting that the modifications are chipping away at the package to such an extent that it will not bring in enough money. At that point, the "colleagues" will have achieved the worst of all possible worlds – having upset just about everybody without achieving their stated objective. And it could not have happened to a nicer bunch. COMMENT: CYPRUS COMBINED THREAD
Posted by Richard at 23:40