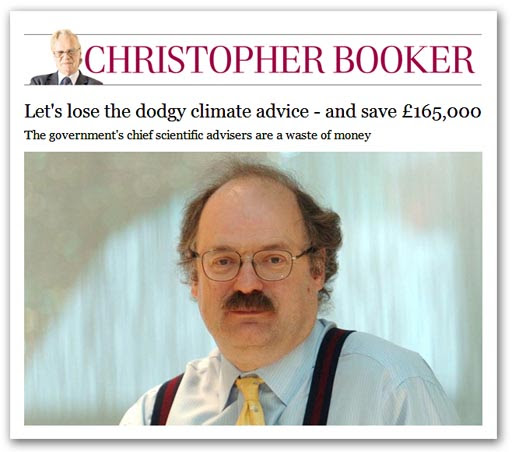 I am not sure the link will work for those who haven't signed up to the new paywalled Telegraph, but we'll try to keep to the tradition of posting the lead story of the Booker column, even if it can't be read online.

Last week, writes Booker, as Britain and much of Europe were struggling through the coldest spring in decades, Sir John Beddington marked his retirement from his £165,000-a-year post as the Government's chief scientific adviser by touring the television and radio studios to terrify us all once more with his all-too-familiar message of how we are threatened by runaway global warming.

Thanks to climate change, the litany runs, we now face ever more disruption to our weather, ever more floods, droughts, hurricanes, blizzards and all the rest. Whether it is too cold or too hot, too wet or too dry, we are meant to believe that it's all our fault and we must bring the climate back under control.

In fact, it is far from clear why Sir John, as an expert in population biology, should be regarded as having any authority to pronounce on such matters. A year or two back, for instance, he was telling us that by the end of this century we can expect the warmest days in Europe to be 8ºC hotter than they are now, and that in America they will be 11ºC hotter – claims that exceed even the wildest predictions of the UN's Intergovernmental Panel on Climate Change.

What is it about these chief scientific advisers that, one after another, they are expected to come up with the same old claptrap about the future of the climate, even though their scientific specialisms give them no more obvious qualification to sound off on this subject than a chap holding forth in the pub?

Sir John's predecessor, for instance, was Sir David King, a "surface chemist" who got entangled in controversy over a seeming prediction that he made to MPs that by the end of this century, unless we curbed our CO2 emissions, the world could well get so hot that the only continent still habitable would be Antarctica.

It was he who came up with the unique claim that the extinction of the dinosaurs "55 million years ago" was caused by the world overheating thanks to soaring levels of carbon dioxide. In fact, the end of the Mesozoic era is generally agreed to have been 65 million years ago, and no one apart from Sir David ever seems to have claimed that the dinosaurs’ disappearance was due to an excess of CO2.

King's predecessor as chief scientific adviser was Sir Robert (now Lord) May, another population biologist who is a complete fanatic on global warming. He was the "top expert" called in by the BBC to address that secret seminar in 2006 when he advised its top executives that they should stop giving airtime to "climate deniers" who only take the view they do because they are in the pay of the fossil-fuel industry.

A remarkably similar line has been taken by the man who is now to succeed Sir John in the post, Sir Mark Walport. He is a specialist in immunology, who in 2011 rushed to endorse that dotty report for the BBC Trust by the snail expert Steve Jones, advising the BBC that it should show not less bias on climate change, but more.

Since it seems that the only purpose of having a chief scientific adviser these days is to parrot the official line on global warming without having any very obvious understanding of the subject, concludes Booker, isn't it time we saved ourselves £165,000 a year by abolishing this post altogether?
COMMENT THREAD
Posted by Richard at 10:15