EU legislation: blundering in the dark 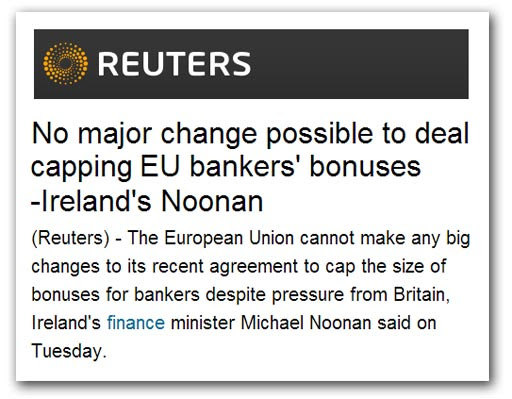 With the Daily Telegraph and other representatives of the legacy media reporting on today's supposed "clash" involving Chancellor Osborne over bankers' bonuses, we confront yet more evidence that the corps of journalists genuinely have no idea how the European Union is run.Typical of the pack's offering is the Telegraph's headline, "Osborne faces clash over bank bonus cap at talks with EU finance ministers", framing the story in terms that the lame hacks can understand – the "battling Brit" versus the rest of the European Union. This child-like pastiche is as far as the media can go, as their lamentable ignorance prevents them understanding what is going on. Even Reuters, whose journalists lay claim to the possession of some brain cells (even if they are rarely used), don't seem to be capable of navigating their way through the Brussels morass. They wrongly assert that Osborne today had a chance to "challenge plans in Brussels to cap bankers' bonuses".Nevertheless, in another of the agency's reports, we have an apparent corrective to theTelegraph's trivialising biff-bam approach, telling us that Osbonne has no chance of getting a change to the status quo, citing Ireland's Finance Minister, Michael Noonan, as its source. Irish ministers, of course, have special status here, as Ireland currently holds the presidency of the EU's Council of Ministers. But what we don't get from Noonan is precisely why Osborne is whistling in the wind. Actually, it is quite possible that Noonan doesn't know anything beyond the framework in which he operates. The system is indeed complex, and one finds that even senior cabinet ministers in the British government have a very limited grasp of the EU's procedural rules.  At the highest level this applies, as time and again David Cameron has shown himself ignorant of the EU's procedures. But the reason Osborne could not prevail today at the finance ministers' meeting was because there is no procedure which would allow him to do so. The ball did not rest in the Council's court, as the next move belongs with the European Parliament. As we discussed on Sunday, this is dictated by the EU's ordinary legislative procedure (formerly known as the co-decision procedure), the nature of which seems to defeat the entire corps of journalists and indeed most of the Member State politicians. The journalists' mistake seems to stem from their insistence in treating the European Union as a homogeneous body, instead of a series of (often warring) institutions – and then (in the British camp) to treat the UK as if it were somehow separate from the EU instead of an integral part of it. Failing to make the distinction between the EU as a whole and its institutions, the hacks are thus unable to appreciate that we are witnessing a power struggle between the European Parliament – strengthened by the Lisbon Treaty – and the Council of Ministers, representing the Member States. This is an interesting development, the subtlety of which evades the average hack, as the traditional struggle was always between the European Commission and the Council (of Ministers). But now the European Parliament (EP) is emerging as a powerful player in its own right, challenging both the Commission and the Council. Those, incidentally, who still dismiss the EP as a "toy" parliament, without power, are out of date. The Lisbon Treaty substantially altered the balance of power, and this institution is beginning to flex its muscles and make a real impact on the legislative scene. Thus, as we partially explained on Sunday, what we have is the EP's Economic and Monetary Affairs Committee, through its rapporteur Othmar Karas, drafting an amendment to the Commission's proposal, which imposes a cap on bankers' bonuses. On Sunday, I was unable to find the original amendment – assuming therefore that it had yet to be formally tabled. But it was there. The reason I could not find it was one of terminology. While the media at large (and the politicians) are referring to "bonuses", the amendment was couched in terms of "variable remuneration".Once this is understood, the rest becomes clearer. Karas's amendment was actually approved by the Economic and Monetary Affairs on 7 March 2012, but what we see is the cap on bonuses set (as is the current proposal) of no more than the fixed salary, but a requirement that they should not exceed two times the fixed part. However, this basic amendment then attracted rival and more severe amendments, not least from the Greens, limiting total remuneration to "three times the salary of the head of the respective government" or no more than "thirty (or twenty) times the average remuneration of the lowest paid five percent of employees". One amendment even capped total remuneration to €500.000 while another banned bonuses altogether, for bank directors. Yet another limited bonuses to 50 percent of fixed remuneration. Thus, the EP was facing a situation – which is not untypical – where a series of rival amendments were to go before the plenary, from which only one could emerge, and where no single amendment could command majority support.  Here started the horse-trading that is not in the rule books, and which you will not see written up in the text books. At this point, one has to understand that the EP was arguing over the committee report, which was to become the submission to the parliament as a whole, from which was to emerge the parliament's "common position".

But then the situation became even more complicated, as the Council, alarmed that one of other of the more extreme amendments might emerge – or that there might be no amendment at all – convened a series of "trialogues".

This is what has confused the poor journos, as these are entirely informal talks between the Council officials (COREPER), the Commission and members of the EP's Economic and Monetary Affairs Committee, including Karas.

Officially, these trialogues (sometimes called "trilogues") don't exist formally. They only appear in therules of procedures and the informal guidance as informal meetings. Thus, they cannot make formal agreements. But it was at the final trialogue that the parliament agreed to rationalise its amendments and get behind a new amendment, proposing that bonuses should not exceed fixed remuneration – a 1:1 limit.

And that is why, today, Osborne did not have a vote. There is no formal agreement to vote on, within the framework of the rules. Nothing now can happen until the EP votes on a consolidated amendment which emerged at the trialogue, provisionally set for 17 April. Then, and only then, does the parliament adopt its position - which may or may not include the bonus cap, depending on how the MEPs vote.

Thus, as today's Council report makes abundantly clear, neither the bonus issue nor any other matter "can be considered as finally agreed until an overall accord on the package is reached".

Under the current procedure, that "accord" requires, in the first instance, the EP position to be agreed and then communicated to the Council. Only at that stage does the amended proposal formally exist - given that it has attracted majority support from the EP. Then, and only then can the Council discuss and vote on whether it agrees with the parliament.

On this basis, the very idea that there would be a showdown today was a complete misrepresentation of the process – an ignorant fantasy on the part of the media. Osborne has gone away frustrated, as was always going to be the case. He must wait his turn.