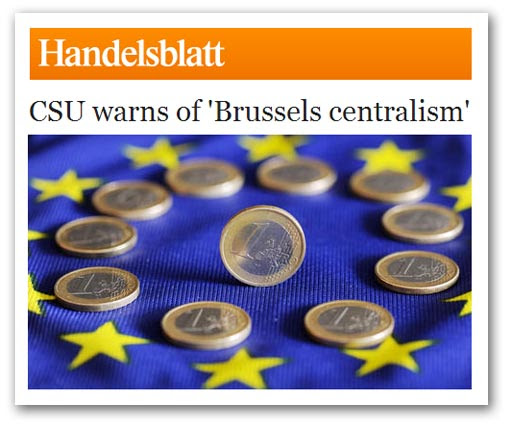 As predictable as the sun rising in the morning, EU officials are using the latest crisis as an argument for "more Europe". This time it is EU Internal Market Commissioner Michel Barnier, whohas demanded as a consequence of the Cyprus crisis, that the management of the eurozone should be strengthened.

Monetary union, he says, needs a dedicated "Ecofin" type body, merging the offices of the eurogroup chairman and the EU economic affairs commissioner.

Strangely, he gets short shrift from the chairman of the Union Group in the Bundestag finance committee, Hans Michelbach (CSU). He rejects the idea, saying that this "is another flimsy attempt to expand Brussels centralism". This does not solve the problem, he says. Rather, it threatened to proliferate problems.

Such a lack of enthusiasm for further integration might seem a bit odd, although some Germans arestill feeling bruised by the bad press they are getting. "Germanophobia is unfair", declares Spiegel.

However, before you decide whether it is safe to go out, check out FAZ Robert Menasse and Ulrike Guérot proclaim: "Long live the European Republic". No nation state can solve problems alone, they say, but it is the lack of democracy in Europe that prevents it coming into its own.

This is one of a raft of articles on the same theme. The pursuit of European political integration is very far from dead.

Spiegel though has other fish to fry, telling us more about the run of money out of Cyprus.

The banks there are saying it was impossible to prevent all money slipping out of the country, despite the account freeze. Much of the money was withdrawn from overseas, where Cyprus had no authority. Branches of Cypriot banks in non-eurozone countries such as Russia and Britain do not answer to the European Central Bank. Their liquidity is controlled by central banks in those countries.

What is priceless, though, is the magazine's comment that their defence is "nothing less than a voluntary admission of impotence". Holders of smaller savings accounts, it says, have been unable to access much of their money for almost two weeks, companies have been unable to pay their suppliers and across the country people are concerned that their salaries will not arrive on schedule on the first of the month.

Meanwhile, rich business people and those with connections overseas have been able to transfer their money into foreign accounts, says the magazine. And that is the reality of the European Union. For all the talk and the high aspiration, it's about the little man being shafted.
COMMENT THREAD
Posted by Richard at 17:16