Horsemeat fraud: is someone taking the pig? 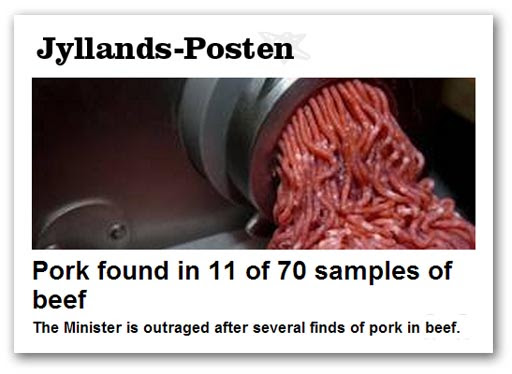 The Danes have been congratulating themselves over the horsemeat fraud affair, after finding that adulteration has not been at all widespread.

They have, however, been somewhat disconcerted by reports that 11 of 70 beef samples tested have shown positive for pork. In seven out of the eleven samples, the level was in excess of seven percent.

Food minister Mette Gjerskov is "outraged", saying that when there is more than one percent pork in beef, it is not carelessness with mincers and using the same knives that industry often claims. It is cheating and cheating, because there is a financial gain from using pork in the more expensive beef.

The minister is now exploring options for tighter controls, looking at whether testing can be carried out, and whether it is best to sample it before it ends up on the cold counter. Whatever else, the minister concedes that there is a need to strengthen surveillance.

Denmark, however, is the land of those cartoons, and where there is considerable antipathy towards the flood of Muslim immigrants. Could it be therefore, that the adulteration is driven not by the prospect of financial gain, but for other reasons.

Muslims are prohibited from eating pork, which they regard as "unclean" (including those people who don't use toilet paper) , and spiking their food with pork could be regarded as making a statement. And not a few people believe that this is precisely what is happening.
COMMENT THREAD
Posted by Richard at 23:21