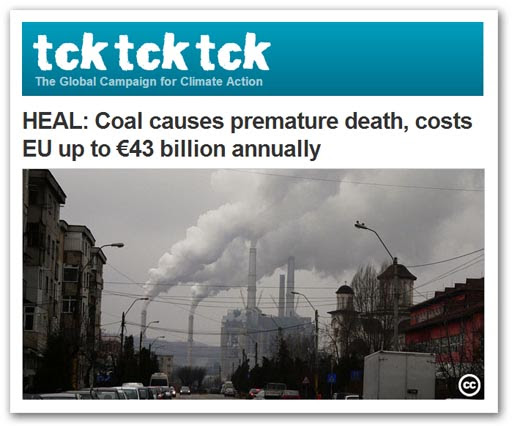 Launched upon the unsuspecting world today is a report headed "The Unpaid Health Bill - How coal power plants make us sick". Aimed at coal-fired electricity generation, this is a naked attempt to play the "health card", bolstered by faux economics, as a means of promoting the climate change agenda.

Translated into journalese by AFP, this becomes a tale about how Emissions from coal-fired power plants in the European Union contribute to over 18,000 premature deaths a year and cost an annual €42.8 billion.

The basis of this calculation is the allocation of a direct cost of €2.3 million to each premature death, at an upper range, which is a classic scare tactic. To put it in perspective, we are told that lung cancer in Europe (2008) caused 367,000 premature deaths.

Applying the same value (€2.3 million) to those deaths, we come up with a cost of €844,100,000,000. With the entire EU GDP standing at a mere €12 trillion, that would suggest that lung cancer deaths alone cost the EU economy a full seven percent of GDP.

It is worth remembering that yesterday, we had the great hoo-ha about processed meats adding 20,000 premature deaths to the list, in the UK alone. That, by the same reckoning, would cost the UK economy €46 billion.

Now, ignoring causes of premature death such as heart disease, and concentrating just on cancer, the deaths for the EU are about 550,000 a year. By definition, all of these are premature. Thus, if we apply the €2.3 million cost, we arrive at €1.265 trillion.

Then, if we take on board cardiovascular diseases (CVD), there are about two million deaths a year, of which, it is calculated that 80 percent are preventable and therefore – by definition – premature.

Apply the €2.3 million cost to this group, and we are looking at €3.7 trillion. This brings the total cost burden to the EU economies from cancer and CVD to nearly €5 trillion. Add other causes of premature death and we are easily looking at €6 trillion plus – more than half the entire annual EU GDP.

Clearly and very obviously, the figure of an annual cost of €42.8 billion for the health effects of coal-related air pollution is a gross exaggeration, more so when we look at some other claims in this respect. For instance, in 2005, we had a BBC report on a study by the European Commission which had air pollution (as a whole) responsible for 310,000 premature deaths in Europe each year, costing "more than" €80 billion.

So, when the European Commission looks at 310,000 deaths a few years back, they "cost" €80 billion, or thereabouts, but when the Health and Environment Alliance (HEAL) – the author of the current report – looks at just over 18,000 coal-related deaths, they cost €43 billion.

Look at the Commission and HEAL, though, we find – effectively – they are one and the same. The HEAL study is part-funded by the EU and the cost assessment is based on data reported under the Large Combustion Plants Directive (LCPD).

This relies on an assessment published in The Lancet in 2007, based on the results of the EU funded research project ExternE (to which the European Commission contributed €10 million), where one Terawatt hour (TWh) of electricity produced from hard coal was reckoned to cause on average 24.5 air pollution related deaths. Then, the calculation of health impacts and related costs is based on the same methodology as used by the Clean Air For Europe (CAFE) Programme – also funded by the EU.

Small wonder that the Commission prefers to use its paid proxies to spread its propaganda, with very convenient timing as the LCPD is set to knock out a major component of our generating capacity. Playing the "health scare" card is always a winner, especially if you can call in aid the "non-profit" Health and Environment Alliance to do your dirty work.
COMMENT THREAD
Posted by Richard at 09:57