Eurocrash: "all the mistakes that were there to make" 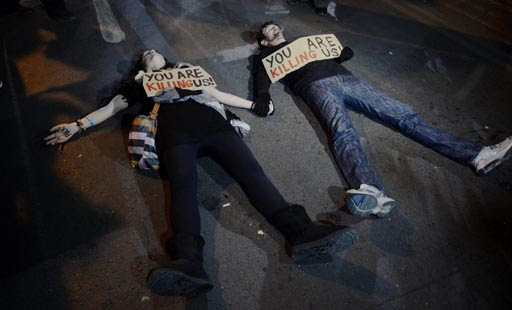 That is the view of Russian Prime Minister Dmitry Medvedev. He has accused the EU of behaving "like a bull in a china shop", making all the mistakes that were there to make, "including the undermining of confidence in the financial institutions as a whole, not only the Cypriot".
Nevertheless, the world is full of people wise after the event, and one would never take Russian politicians at face value. They are hardly paragons of virtue. However, even the venerable Handelsblattis counting the mistakes. The cardinal error, it says, was the intended compulsory levy on deposits of less than €100,000.
This error is attributed partly to German Finance Minister Wolfgang Schäuble, who called for Cypriots to make personal contributions to the bailout, totalling €5.8 billion, but left it open as to how the money should be collected. It was then Cypriot President Nikos Anastasiades who proposed charging depositors with less than €100,000.
By this means, we are told, he protected higher level depositors, but was thus seen as penalising small savers.
There may, though, have been more to this than meets the eye. Doubtless, a large number of offshore "investors" place their cash via resident nominees, disguising their true origin. And there has been some suggestion that they use multiple accounts, keeping each deposit below the €100,000 level in order to take advantage of the deposit guarantee scheme.
Whatever the real reasoning, the blame-game is in full spate, along with the usual crop of statements of the obvious. Says Berenberg chief economist, Holger Schmieding: "The real Achilles heel of monetary union is that it is not yet sufficiently well-established for there to be confidence in the future of the euro". You can see why this man is a chief economist.

Fluff of the week, though, comes from Heidi Moore of the loss-making Guardian. "What happens if Cyprus doesn't stay in Cyprus", she asks (no correct to "in"). Rhetorically, she then tells us that this would have implications for the EU, and, to the extent that it reveals how the EU works. It also has implications for the US, she says.

One is not sure quite how Cyprus could leave Cyprus but, in the world of the Guardian, I suppose anything is possible. There again, she might just be referring to Cyprus leaving the euro, in which case, I wish I could get paid for writing that "this would have implications for the EU". You have to be a real expert to work that one out.

Nevertheless, Moore too thinks it all a "fiasco", and when the europhile luvvies in this newspaper allow that sort of thing to be said, we are at last getting somewhere.

Closer to the ground, Kurt Kister comments for Sueddeutsche.de, telling us that, despite the apocalyptic scenarios, a Cypriot bankruptcy is quite unlikely. There will be a kind of bridging solution, he says.

Hardly anyone in Brussels, Berlin, Paris and Nicosia itself has a real interest in making Cyprus leave the euro or even the EU. So you will probably find a compromise, with perhaps even loans from Russia or elsewhere, says Kister.

For all the pyrotechnics, that is probably the truth of it. A ten billion euro loan, and change, does not threaten "Europe". The situation will be resolved. But things will never be quite the same again.