Eurocrash: Cyprus - a massive own goal 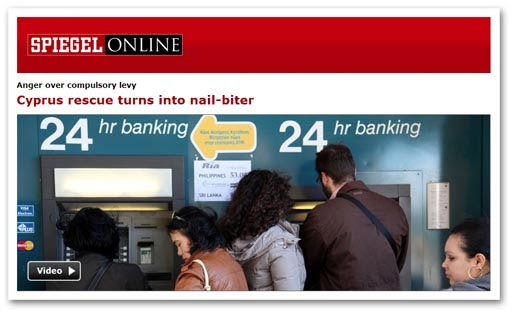 German newspapers are all over the Cyprus situation, many of them currently running the story as page lead on online editions. Approval of the move EU move, though, is hard to find, as the developments are greeted with a mixture of alarm, incredulity and criticism.Spiegel, for instance warns of the compulsory levy ensuring "massive trouble", with bank customers "outraged". There are even doubt as to whether the Cypriot parliament will agree. But there is little choice on offer. The country has the choice to accept the package, and thus to prevent a chaotic national bankruptcy, or reject it, and then accept the consequences, says the deputy chairman of the conservative ruling party Democratic Rally (DISY) Averof Neophytou. The Green MEP Georgios Perdikis speaks of a "lose-lose situation".That said, today is a bank holiday in Cyprus, and a parliamentary vote planned for yesterday has been transferred to this day, while the banks remain closed. So uncertain is the outcome of the vote that there is talk of keeping the banks closed on Tuesday as well, to avoid "a stampede of outraged savers".To try to soften the blow, attempts are being made to open talks to renegotiate the deal, even if Angela Merkel and her finance minister are defending the bailout plan in public. But there is no certainty that the Bundestag will back her. Crucially, Die Welt calls the rescue "wrong and risky", not least for the effect if will have on Spanish and Italian sentiment. "Who can now say that Spanish or Italian banks will not proceed under Cypriot model?", it asks. Effectively, this is a massive "own goal" in the part of the eurozone as, in one fell swoop, the "colleagues" have destroyed will little vestigial trust there is in the banking system. You can not blame any Spaniard, if he puts his money s under the mattress, says Die Welt. And thus is exacerbated the banking crisis. Handelblatt has detail on the proposed renegotiation, which will attempt to exclude small savers, exempting sums less than €25,000. The British government, meanwhile, has moved quickly to protect the deposits of military and government personnel who are stationed in Cyprus. The euro will became legal tender on all British military bases in Cyprus, when the country joined in January 2008, the first part of sovereign British territory to adopt the currency."We are going to compensate anyone who is affected by this bank tax. People who are doing their duty for our country in Cyprus will be protected", says George Osborne. 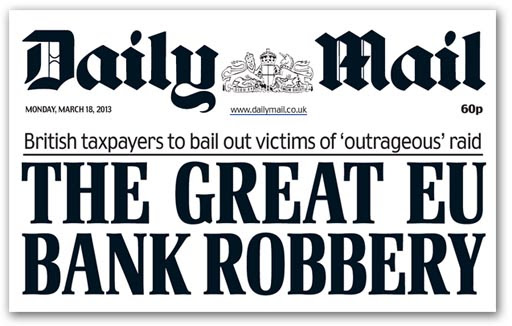 Needless to say, the British government is taking the line of least resistance, undertaking to pay the levy on behalf of Crown employees, rather than objecting to its imposition. This is something theDaily Mail is quick to point out. It leaves us, as taxpayers, to pick up the bill. An estimated 60,000 expats, however, will get no assistance.

Putting the whole affair in perspective is Frankfurter Allgemeine Zeitung, which talks of the destruction of trust. "For euro-based investors, there is no more security for their savings", the paper says.

Pointing out that Cyprus has a minute economy, smaller than the Saarland, and that the "colleagues" are claiming there is no systemic risk to the eurozone, where central bank balance sheets fall in the trillion range, it questions why such dramatic action has been over a loan of €10 billion, the amount being advanced to Cyprus.

So many things simply do not stack up that that the ECB is seen to be stoking up fear of contagion – especially as Greek savers are heavily exposed. This does not touch the banks or deal with the underlying problems. It is a tax on wealth.

Thus does Die Zeit believe that we have reached a new stage in the eurocrisis.  The rescue has turned into a "nail-biter". No one is now prepared to predict what will happen next.