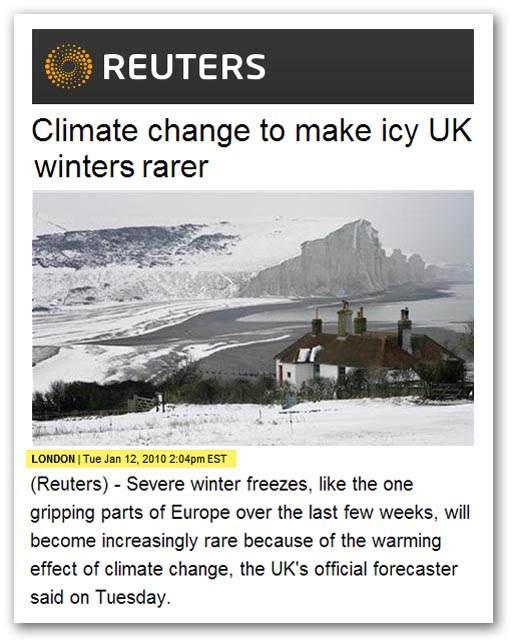 Well, we all remember Dr David Viner telling us that "Snowfalls are now just a thing of the past". Within a few years, he told us in March 2000, winter snowfall, would become "a very rare and exciting event".

The thing about warmists, though, is they never give up. Back in January 2010, after one of the coldest winters in 30 years, we got John Hammond, a meteorologist at the UK Met Office, telling us: "Winters like this are likely to become less of a feature as we head through the 21st century".

"Colder winters". He said, "become less likely because overall the background warming will reduce the severity of them, certainly for our part of the world".

And now, in the grip of the coldest March for fifty years, with global warming thick on the ground, the fool Beddington, the government's outgoing chief scientist, is telling us that the effects of climate change on the weather were already being felt in the UK.

"In a sense we have moved from the idea of global warming to the idea of climate change … temperatures are increasing but the thing that is going to happen is that we are going to see much more variability in our weather', he says, then adding, "I think you only have to look at the last few years to see how that is actually starting to manifest itself even in the UK".

Looking out the window at the snow drifts, we can indeed see how this "climate change" is manifesting itself. But we expect no relief from the idiots the government insists on appointing as it chief scientific advisors.

Beddington's successor is Sir Mark Walport, former director of the Wellcome Trust, and a medically trained immunologist. This great sage is already imbued with warmism, telling us in 2009 that, "Reducing greenhouse gas emissions is not only essential to help tackle climate change, it is also an important way to improve public health".

This is also the man who, in July 2011 was adding to his voice to the complaints that the BBC was giving "too much weight to fringe views on issues such as climate change".

So, as we shiver through the unseasonable weather, hardly daring to venture out into the biting easterly wind, these fools prattle and prance with the quasi-religious mantras.

You will get nothing sensible from Walport. He is pure establishment. But then that is the joy of being a warmist – you can keep repeating the same old, same old, never having to admit you are wrong. And the idiots in government will always give you a nice cushy job.
COMMENT THREAD
Posted by Richard at 23:21