Eurocrash: a war of nerves 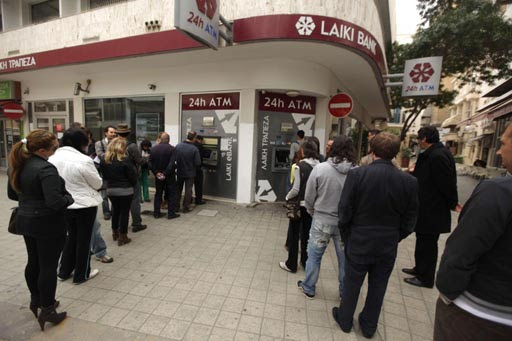 In an unprecedented move, Handelsblatt is running a live blog as its lead item, dedicated to the Cyprus crisis. The fate of the country, it says, is "on a knife edge", the rescue a "war of nerves". It's like a poker game, says the paper. At the table: Cyprus, the euro countries, the ECB and Russia. But in the end it's probably not about who wins, but who loses.

The eurogroup has made it clear that it will not accept Nicosia's "Plan B", and its so-called "solidarity fund". The Cypriot parliament has adjourned, and a government spokesman has said, "the next few hours will decide the fate of Cyprus".

If nothing changes, says FDP Bundestag member Frank Schäffler, "the unification of Europe will be destroyed". He is right in the sense that the "colleagues" have far more to lose than Cyprus. This is a huge game of "chicken". Who will swerve first?

Die Welt thinks Cyprus will be first. It looks more and more as if it will slide into national bankruptcy, it says. For the eurozone, the consequences would probably be controlled. On the island, however, chaos would erupt within days.

But I think the paper is being a little optimistic. There are over a million people on the island - three times the population of Iceland. The EU is not going to be able to walk away from economic chaos, and continue as before, business as usual.

Banking - as we all know - relies on trust, and reputation. But so does government. The reputational risk to the EU is as great as any physical effects, and the prospect on the second-largest economy on earth being unable to solve the problems of a small island nation is one that will have massive ramifications.

Die Welt says that Cyprus, after bankruptcy, would have no other choice than to print its own money. The departure from the eurozone would be sealed. But the country would have to formally announce its withdrawal from the EU, because leaving the euro is not in the European Treaties. The damage that would cause to the psyche of the EU would be incalculable.

However, the trauma dopes cut both ways. Even if the EU takes a trouncing, Cyprus can still get hurt. And, if Berliner Zeitung reads the runes correctly, the Cypriot government is not getting it all its own way.

It has been accused of a devious strategy, playing Moscow and Brussels off against each other. But now, says the paper, the strategy has failed. Russia does not want to play the saviour, and the euro partners resent the game playing.

With their "irresponsible act", says BZ, the government in Nicosia has not strengthened its bargaining position. "This is perhaps the only good thing about the disaster of the last few days".

But this seems to be far from the only "irresponsible act". From the Deutsche Wirtschafts Nachrichten emerges the news that as much as €4.5 billion was withdrawn from Cypriot banks and taken out of the country in the week before the announcement of the compulsory levy. Overall, since the beginning of the year, €20 billion has been "invested abroad".

In Germany, they are applauding the belated move by the ECB to impose massive restrictions on the movement of capital from Cyprus. "After the stupidest economic decision recently to levy a tax on all Cypriot savers, says Gustav Horn, Director of the Institute of Macroeconomic Research, "the financial system is once again on the brink".

For that reason, the temporary introduction of capital controls is a "well-justified emergency measure", he says.

And the emergency continues. At the end of the day, a dramatic day by some accounts, there is no a solution, but there is another package on the table. The compulsory levy is back, with a high rate - as much as 15 percent on balances of more than €100,000 euros. And with that, the Cyprus crisis lives to see the next day.