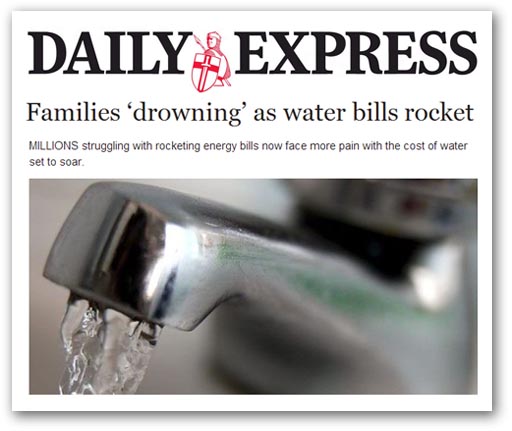 Although there has been a great deal of attention paid to domestic energy costs recently, less has been focused on the depredations of the water companies, which have been stealthily increasing their charges.

However, this was picked up by The Daily Express last Wednesday, when it told us that the average annual water bill is due to rise to £388, with effect from Easter Monday.

Overall, there has been a 3.5 percent increase, year-on-year, approved by water regulator Ofwat, yet another increase to service the corporate behemoth. Certainly, our local provider, Yorkshire Water, needs the money, its holding company having to find £800,000 in salary and pension contribution for its "highest paid director", which presumably is CEO Richard Flint. That leaves Yorkshire Water to pay the bonuses, which would put Mr Flint into the million pound bracket.

According to Ofwat chief executive, Regina Finn, the increase in charges is "driven by inflation" and "will pay for investment in the industry". But what neither Ofwat nor the Express tell us is that water bills have all but doubled in the last ten year. In 2003, we had to find £157.28, and now Mr Flint needs £293.84 as our contribution to his pension fund. 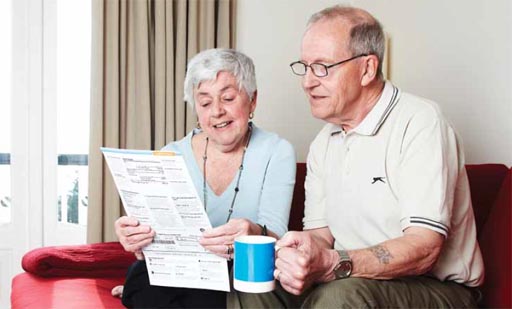 The happy world of the water industry, though, is populated with smiling customers reading their bills (above, from a YW corporate brochure), with Yorkshire Water telling us, "We deliver our services to customers at a price they are willing and able to pay, whilst providing investors with returns that attract long-term investment". The fact that, if we want a water supply, we have no choice whatsoever, seems rather to have escaped them.

But, at least, the water companies do seem to have a choice about whether they pay tax. As theObserver reported last year, three of Britain's biggest water companies paid little or no tax on their profits while generously rewarding their executives and investors. Thames Water and Anglian Water paid no corporation tax on the profits made from their utility businesses.

According to the monitoring organisation Corporate Watch,Yorkshire Water, with a turnover of £893.6 million made an operating profit of £303.3 million, but paid only £2.9 million in corporation tax. This it achieved through artificially adding to its debts by taking high interest offshore loans, via its intermediate owner Kelda Holdco Ltd, thereby reducing its taxable profits in the UK.

But then, when your owners are investment funds based in the US, UK and Singapore, and the HSBC, acquired for the princely sum of £3 billion, one must take every little advantage on can, including a quiescent Ofwat which seems quite happy to allow its charges to maximise the use of tax havens.

Thus are water companies treasured for their "stable cash-flows and sizeable dividends", which can continue for as long as they are so easily allowed to milk their customers. And we are supposed to believe that private ownership of our assets is somehow better?
COMMENT THREAD
Posted by Richard at 20:32