Eurocrash: corruption at the heart of the Cypriot crisis?

It was Tuesday when I was writing that there were more details on Cyprus yet to emerge. That was a fairly safe prediction, but the point I was trying to make was that there is more to this "rescue" than meets the eye, and the real reasons for the behaviour of the "colleagues" has yet to emerge.We might be getting a little closer though with the revelations breaking in the Greek press, conveyed also by ekathimerinini.com and in Spiegel.These tell of an unhealthily close relationship between the Cypriot banks and politicians, and with political parties and trades unions. Thus we hear that the Bank of Cyprus and Laiki, between 2007 and 2012 gave loans amounting to millions to these groups, without in any way seeking full repayment. The Bank of Cyprus wrote off the €2.8-million loan given to a hotel with ties to the communist-rooted Progressive Party (AKEL) and forgave significant portions of many other loans. A national labour union is said to have been forgiven €193,000 of a €554,000 loan. An unnamed company was forgiven €110,000 from a €1.83-million loan, a prominent MP of the centrist Democratic Rally (DISY) party saw €101,000 of a €168,000 loan written off and a company owned by the brother of a former minister of the conservative Democratic Party (DIKO) had €1.28 million of a €1.59-million loan written off. Several other MPs and the mayor of large city allegedly had significant portions of their loans forgiven by Bank of Cyprus. Companies linked to a member of the bank's board, to the daughter-in-law of a DIKO deputy and several others also appear to have been offered significant loan relief by the Bank of Cyprus. As for Laiki Bank, it is said to have written off several loans taken out by AKEL and DISY MPs. The bank appears to have written off $5.8 million in debt from a company whose majority shareholder is said to be a well-known Cypriot politician. The ex-wife of a senior ministry official and a company owned by a local ambassador appear to have been benefited. These details, apparently, are only the tip of the iceberg, and more are expected to emerge. The Greek newspaper Ethnos writes that the current details raise "significant political and moral issues" that could have a "serious legal repercussions". Most of all, though, they may shed light on why Cypriot banks had been allowed to behave the way they did, pushing the economy over the edge. This may also explain why the "colleagues" took the action they did, possibly with the foreknowledge that this was not a straightforward bailout. Awareness of deep-rooted, systemic corruption could have dictated the path. For the moment, the Cypriots are being extraordinarily calm about recent developments, and some feelings are being expressed that external intervention was necessary. The island nation may have needed more than just a financial rescue, which could put a completely different complexion on the events we have been witnessing. 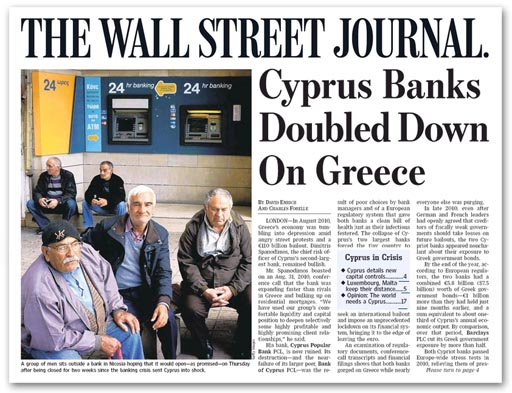 Yet even this is only the half of it. As Wall Street Journal reports, while other lenders were seeking to divest themselves of Greek debt, Cypriot banks were piling in.

In late 2010, even after German and French leaders had openly agreed that creditors of fiscally weak governments should take losses on future bailouts, the two main Cypriot banks appeared nonchalant about their exposure to Greek government bonds.

By the end of the year, the two banks combined had acquired €5.8 billion of Greek government bonds, a billion more than they had held just nine months earlier. By comparison, over the same period, Barclays had cut its Greek government exposure by more than half.

But the regulators do not come out of this clean either. Both Cypriot banks passed Europe-wide stress tests in 2010, relieving them of pressure to change course. They passed again in 2011 and have now booked combined losses of €4.3 billion on their Greek government-bond holdings.

This result transcends normal incompetence, and given the emerging evidence of corruption - all in the context of highly suspect transactions in Greece - it seems increasingly implausible that the Cyprus "rescue" could have been treated as a normal bailout.  With the crooks raiding the cookie jar, just giving them more money was never an option.