The Mail is preening itself at the "brilliant discovery" from its star correspondent, Richard Littlejohn, who today tells us of Dr David Viner and his quote in The Independent from March 2000. That was the one about snowfall becoming a "thing of the past", and a "rare and exciting event".

This is all good stuff, but it might have carried a little more conviction if the Great Littlejohn had kept an eye on the blogs. He might then have discovered it appearing on this blog on 27 December 2009. 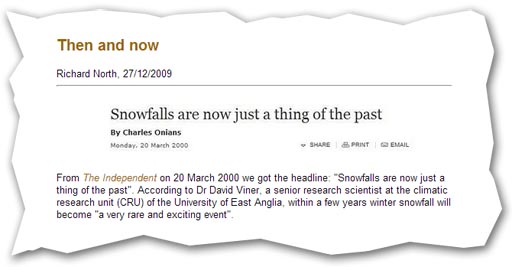 Littlejohn might also have noted that the quote was picked up by Watts up with that two days later, and has since becoming a standard part of the armoury in the war against the warmists. It first appeared in the Booker column in February 2010.

But then, we mustn't grumble. For the Mail actually to catch up with what is going on outside its own tiny little bubble is also a rare and exciting event. We should all applaud the speed with which it has come to the party … only three years late. That has to be better than never. Do we expect a new revelation on Hammond by, say, July 2016?

By the way, we've got another fall of global warming this morning. And while there is a humorous side to the warmists' stupidity, the damage they do is incalculable. Talk to Scottish farmers about the need to tackle global warming – and see how long you live.
COMMENT THREAD
Posted by Richard at 17:22