Climate change: not just us 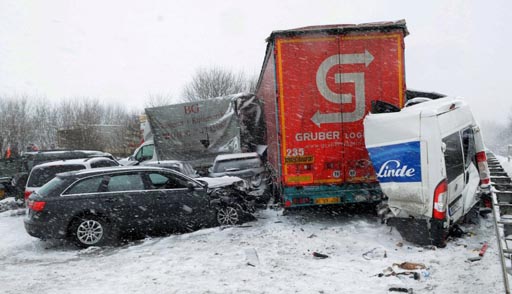 A pile-up in the snow on the A45 yesterday got full media coverage, as dozens of people were injured, some seriously. And it could have been much worse. According to police, up to 100 vehicles were involved in the accident, including several trucks.

Inevitably, there are questions about the lack of preparedness, leading one researcher to note that sudden changes in weather do create a special hazard. But, just for once, this is not the UK. The A45 in question is in Hesse, near Münzenberg, as opposed to the A23 in England which took the brunt of the weather here.

As always, there were complaints from motorists stranded overnight, but there were similar problems in the Channel Islands, and throughout Northern Europe, including France, Belgium. Holland and Germany.

Eurostar train services between London and Paris were suspended after snowfall of up to two feet on the tracks in northern France and Belgium, leaving passengers stranded at St Pancras. But then, nearly a third of France's regions were on alert and the government activated a ministerial crisis group.

Both of the main airports serving Paris were badly affected by the weather, with Charles de Gaulle and Orly cancelling up to a quarter of flights. No aircraft took off from the nearby Beauvais airport, which serves mainly low-cost airlines.

At Orly, a Tunisair flight carrying 140 people from Djerba skidded off the runway on landing but no one was injured, an airport source said. And a traffic accident near Lille injured 14 people and a 58-year-old homeless man was found dead, presumably from the cold, outside a building in the town of Saint-Brieuc in Brittany.

Belgium had its share of chaos, experiencing nearly a thousand miles of traffic jams on motorways caused by snowdrifts and ice. Buses and trains were cancelled or delayed in Brussels and other towns and the high-speed Thalys service linking Paris and Brussels was suspended.

Thus, it is not only Britain that suffers unduly when there is unexpected snowfall. Most of the European authorities seems to have been unprepared – as indeed were many drivers.

But most unprepared of all were the warmists. They have been very quiet indeed, although in due course they will be telling us that this unseasonable snow is down to global warming.

For us in the sunny North, though, this is the fifth bout of snow this season, with one session having lasted well over a week. We have not experience conditions like this for more than 20 years, and I can't remember when we last had snow this late.

With that, it doesn't matter what the warmists say. They really have lost the public argument. And when the lights go out, I suspect it will be open season for greens. And the more they parade their propaganda, I guess the worse it will be for them.
COMMENT THREAD
Posted by Richard at 22:58