UK politics: immigrant controls – a bag of nothing 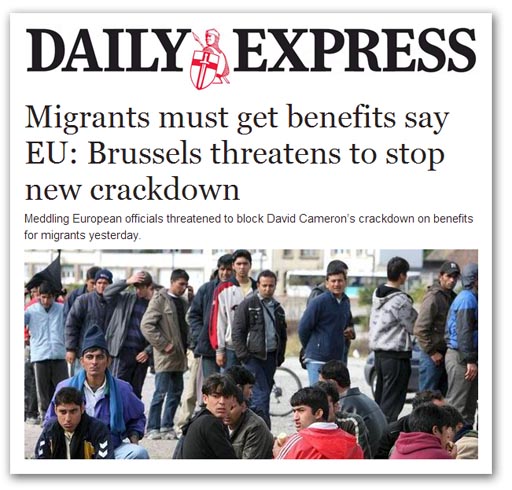 Whenever a politician promises a "crackdown" on immigration, you just know that it will come to nothing.

That was certainly the feeling yesterday when David Cameron told an audience of students at University Campus Suffolk in Ipswich that world he planned to show illegal migrants "the door" and rein in welfare benefits he believes lure foreigners to live off the British state.

Specifically, he declared that certain measures would apply to "all citizens of the European Economic Area", with immigrants having to wait up to five years for social housing. And they would also be subject to tougher "reciprocal charging" requirements when using the National Health Service - meaning their own country will have to pay.

Very quickly, Cameron was accused of "the worst kind of dog-whistle politics", accompanied by reports of his pledges "unravelling" within hours of his speech.

Then, today, we have the Daily Express report that "Brussels" was threatening to block the "crackdown" before it had even started, apparently warning that his proposals – including restrictions on housing, health and unemployment support – must comply with EU free movement rules.

So, once again, we a mired in uncertainty, bumping against the limits of EU law, which circumscribe what a British government can do.

Actually, though, the restriction is not so much "free movement" as Article 18, by which "discrimination on grounds of nationality shall be prohibited". Mr Cameron can impose all sorts of restrictions on benefits, and eligibility to social housing, as long as those restrictions apply uniformly to all residents, whether British or not.

Basically, though, as long as a citizen of any EEA member state can pass what is known as the "habitual residence test", and then conform with the national eligibility criteria for any benefit or service, their entitlements must be placed on the same basis as resident British citizens.

However, Mr Cameron is making a particular play on social housing provision, declaring that, "New migrants should not expect to be given a home on arrival". He thus says he intends to introduce new statutory housing allocations guidance this spring, "to create a local residence test" which "should mean local people rightly get priority in the social housing system".

What Mr Cameron doesn't say, though, is that Local Authorities (LA) have a statutory duty to house certain categories of the homeless, which includes those who have dependent children. If immigrants who are able to pass the "habitual residence test" fall into these categories, the LA is obliged to house them, irrespective of whether they are local or not.

Very often the so-called "statutory homeless" will be housed in temporary accommodation, such as a bed and breakfast hotel. But, if eligible migrants have children or are pregnant, in common with British residents, they can only be placed in a bed and breakfast in an emergency, and there is nothing else available. Even then, the LA can only use this option for a maximum of six weeks, when they must be given more permanent accommodation.

Of what we have seen, therefore, Mr Cameron is offering us nothing at all. What he seems to be doing is dressing up existing provisions and controls, re-presenting them in such a way as to appear to be "cracking down". In other words, it is smoke and mirrors time once again.
COMMENT THREAD
Posted by Richard at 17:23