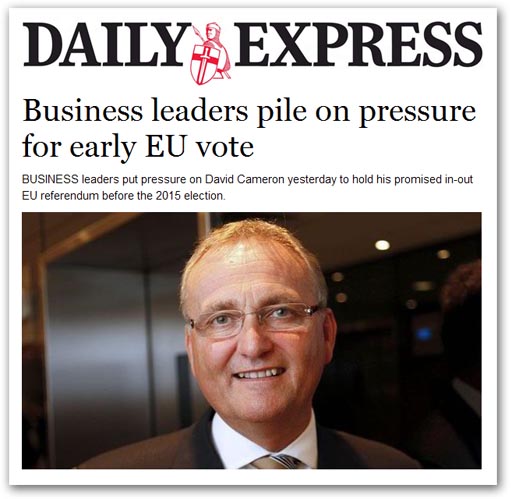 Apart from the Daily Express blundering through the territory, we hardly seem to hear about Mr Cameron's EU referendum.

Via the Express, though, we get a glimpse of it at the British Chambers of Commerce annual conference, where John Longworth, director general, is calling for an early vote. "Once again the Government has chosen to push a decision until after the next election", he says. "Uncertainty is not helpful and the Prime Minister should consider engaging in negotiations this side of the election and bringing forward a referendum".

If this is leadership, then Heaven help up. Longworth backs the PM's stance on renegotiating membership, but if he really thinks that Cameron is able to mount a renegotiation with the "colleagues" in time for a referendum before the next election, he is either ill-advised or terminally stupid.

Further, the last thing we need right now is a referendum. Still we are not ready as a movement to fight an effective campaign. Generally, we see the arguments frozen in time, with the focus on whether we should leave, when the real issue should be "how", part of which being to determine the shape of a post-EU Britain.

But what is remarkable, perhaps, is that the BCC is a voice in the wilderness. From being centre stage, with alarming rapidity, the EU referendum has dropped off the political agenda and is barely discussed in polite company.

Some are trying to resuscitate it, but the issue is going nowhere soon. The heat has dissipated and it is going to take some effort to bring it back. That, at least, gives us time to come up with a better campaign strategy than is currently on offer.
COMMENT THREAD
Posted by Richard at 23:37