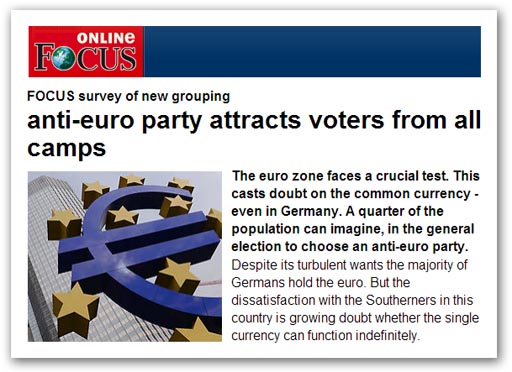 Without even having fought a single election, the Alternative für Deutschland is causing considerable perturbation in German politics, according to an opinion poll carried out for Focus magazine. Given the choice, the "prestigious Emnid poll" finds, more than a quarter of the electorate would vote for this anti-euro party.

Emnid CEO, Klaus-Peter Schöppner, says that the results are worth noting. "The 26 percent is a relatively high value [which] suggests that there may be potential for a new protest party".

Reuters, in a separate report, has picked up the poll, stating that the result highlights German unease over the costs of the eurozone crisis.

Germany's mainstream parties, it says, remain solidly pro-euro despite grumbling over bailouts of countries such as Greece. A German taboo on nationalism, rooted in atonement for the crimes of the Nazi era, has helped to muffle eurosceptic voices.

The poll, conducted by TNS-Emnid, not only showed that 26 percent of Germans would consider backing a party that wanted to take Germany out of the euro, as many as forty percent in the 40-49 age bracket would do so.

The new group was due to hold its first meeting yesterday in a northern suburb of Frankfurt but, so far, there have been no published reports about it, But one of the party founders, economics professor Bernd Lucke, says he has no concern that it would be able to raise the required 2,000 signatures in each German region to take part in September's federal election.

Reuters notes that previous eurosceptic parties in Germany have made little headway. One of them, the "Free Voters", has won seats in Bavaria's regional assembly but have yet to win support at the national level. AFD, though, could prove a greater challenge to Angela Merkel.

Nevertheless, the Frankfurter Rundschau has former economics professor Joachim Starbatty, one of the party's "mentors", admitting that the chances of a breakthrough are limited. It would be difficult for a new party in such a short time to build an infrastructure, he says.

In an attempt to bring them quickly into the game, AFD founder Bernd Lucke sought an alliance with the "Free Voters", but feelers have been rejected. Thus, this liberal-conservative group threatens to fragment the vote, with unknown effect.

Starbutty, though, believes it will be hard for the party to break the strong commitment people have to the establishment parties. But, says Reuters, many Germans, including at the Bundesbank, are deeply uncomfortable with the action by the ECB pledge and last month's inconclusive election in Italy.

These are strange and different times, where the Red Cross has never distributed so much food aid in Europe since the end of the Second World War, and a comedian is predicting a collapse of the political system. Anything can happen in the next six months.
COMMENT THREAD
Posted by Richard at 22:41